Images of women vandalised as Kabul faces up to Taliban rule 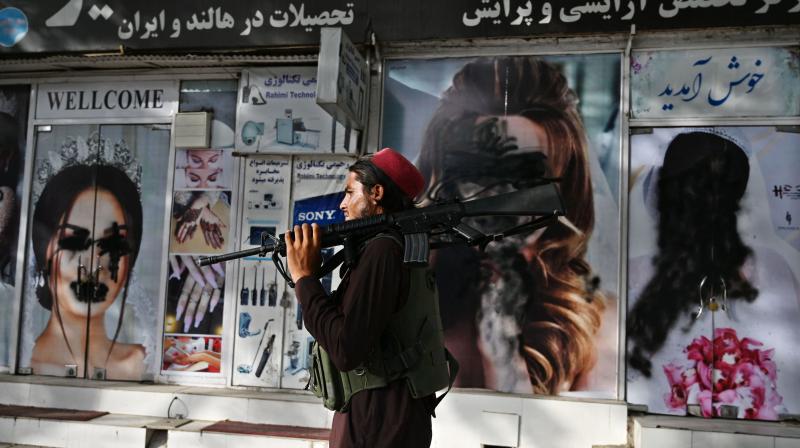 A Taliban fighter walks past a beauty saloon with images of women defaced using a spray paint in Shar-e-Naw in Kabul on August 18, 2021. (AFP)

KABUL: Images of women have been covered up or vandalised on storefronts around Kabul, a sign of the Afghan capital's rapidly changing face in the days since the Taliban took charge.

The new regime's fighters took control of the city on Sunday after a lightning offensive that saw the former government's provincial strongholds around the country topple like dominoes in a matter of days.

The advance was outpaced only by the anxiety coursing through areas yet to fall under their control, from Afghans fearing a repeat of the infamously harsh treatment meted out to women by the last period of Taliban rule.

In the two decades since the US-led invasion that ousted that administration in 2001, hundreds of once-forbidden beauty parlours have proliferated around Kabul.

They have plied a trade in make-up and manicures, serving a clientele of women who had grown up compelled to keep every inch of their body hidden from public view.

But as Taliban forces closed in on the capital, at least one of these stores began whitewashing its outdoor walls to cover up advertisements showing the faces of smiling women in bridal regalia.

Another shuttered salon, spotted on Tuesday as a Taliban fighter patrolled the street outside with an assault rifle slung over his shoulder, had its walls defaced with black spray paint to conceal the visages of its models.

During their 1996-2001 rule, the Taliban were notorious for banning girls from school, preventing women from working in contact with men and publicly stoning to death women accused of adultery.

Its ultra-strict interpretation of sharia law also established religious police for the suppression of "vice".

Since returning to power the group has pledged to respect women's rights.

A spokesman for the group in Qatar told Britain's Sky News that women would not be required to wear the all-covering burqa -- though he did not say what attire would be acceptable.

Suhail Shaheen also said the group would permit women to study at universities.

Another representative said the Taliban were "committed to letting women work in accordance with the principles of Islam", without offering specifics.

But Afghans and the international community have been sceptical of these promises.

The Taliban's advance has accompanied reports of unwed women and widows being forcibly married to fighters -- reports dismissed as "poisonous propaganda" by a spokesman.

Demonstrations have been staged in cities around the world in support of Afghan civilians, and women and girls in particular.

The United States, European Union and other countries have issued a joint statement to say they were "deeply worried about Afghan women and girls" and urged the new regime to ensure their safety.

One Kabul beauty parlour owner told AFP last month that she expected to be forced to shutter her business if the Taliban returned to power.

"If they come back, we'll never have the freedom we have now," said 27-year-old Farida, who asked not to be further identified.