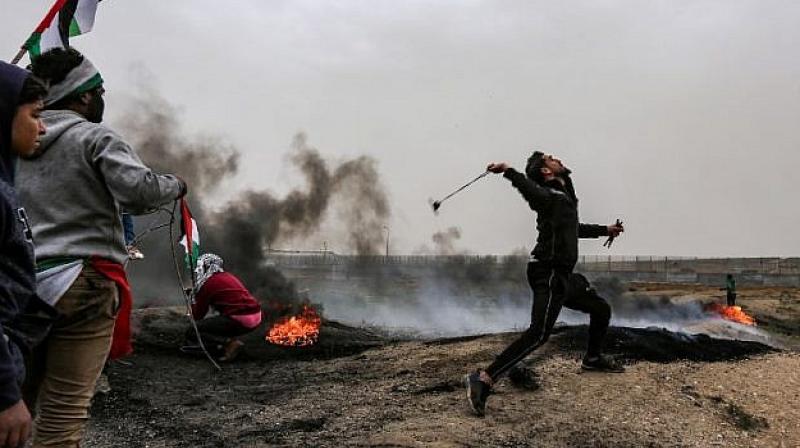 Gaza City: Three Palestinians were killed by Israeli soldiers in the northern Gaza Strip, the Palestinian health ministry said Sunday, hours after three rockets were fired at Israel from the blockaded enclave.

The ministry said another Palestinian was hospitalised in the shooting that came after the Israeli army said an attack helicopter and tank had fired at "armed suspects" along the barrier that separates Israel from Gaza.

"We just identified a number of armed suspects from Gaza approaching the security fence with Israel. We fired towards them," the army said a statement posted on its Twitter account.

The latest violence came after Palestinians in the Hamas-ruled Gaza Strip fired three rockets at southern Israel late Saturday, the Israeli army said, in the second such attack in 24 hours.

There were no immediate reports of casualties. The army said two of the projectiles had been intercepted by its Iron Dome aerial defence system but it did not specify what happened to the third rocket.

Air raid sirens had sounded in the southern town of Sderot and its surroundings.

On Friday Palestinians in Gaza fired a rocket at Sderot, in what the army said was the first such attack since July 12.

In response, Israeli warplanes struck at least three targets in the Gaza Strip early on Saturday but caused no casualties, a Palestinian security source said.

The strikes hit a Hamas observation post in Beit Hanoun, in the northern Gaza Strip, an unidentified target near Gaza City and open ground near Deir El Balah in the central part of the territory, the source said.

An Israeli army statement mentioned only two strikes, against "underground targets belonging to the Hamas terror organisation in the northern and central Gaza Strip".

Israel and Palestinian militants in Gaza, ruled by Islamist movement Hamas, have fought three wars since 2008.

And since March 2018, regular protests and clashes have erupted along the border of the blockaded coastal enclave. At least 305 Palestinians have been killed by Israeli fire in Gaza or the border area since then, the majority during demonstrations and clashes.

Seven Israelis have also been killed in Gaza-related violence over the same period.