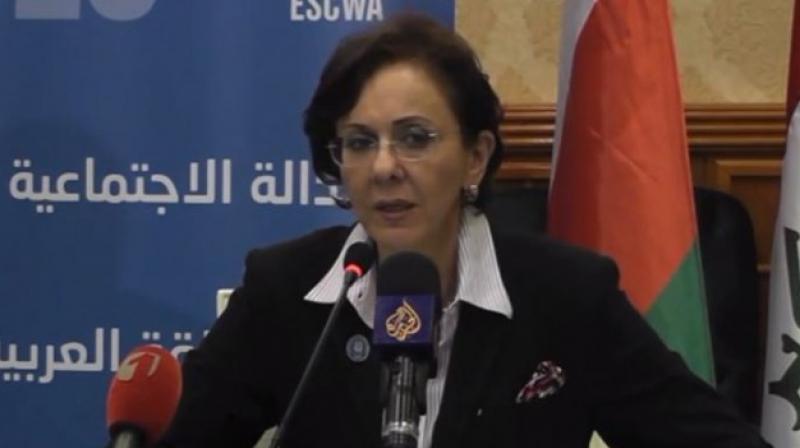 UN official Rima Khalaf announced her resignation on Friday, saying the secretary general had asked her to withdraw a report in which she accused Israel of being an “apartheid state”. (Photo: YouTube)

Beirut: UN official Rima Khalaf announced her resignation on Friday, saying the secretary general had asked her to withdraw a report in which she accused Israel of being an “apartheid state”.

UN chief Antonio Guterres accepted the resignation of Khalaf, a Jordanian national, his spokesman Stephane Dujarric told reporters in New York, while denying that the secretary general had acted under US pressure.

“I asked him to rethink his decision, he insisted, so I submitted my resignation from the UN. We expected of course that Israel and its allies would put huge pressure on the secretary general of the UN so that he would disavow the report, and that they would ask him to withdraw it,” she added.

“It’s only normal for the criminal to attack those defending the cause of his victims, but I cannot accept being subjected to such pressures,” she told reporters in Beirut, quoting from her resignation letter.

On Wednesday, the United States demanded that Guterres withdraw an ESCWA report entitled “Israeli Practices towards the Palestinian People and the Question of Apartheid”.

The report concluded that “available evidence established beyond a reasonable doubt that Israel is guilty of policies and practices that constitute the crime of apartheid”.

“Anti-Israel activists do not belong in the UN. It is time to put an end to practice in which UN officials use their position to advance their anti-Israel agenda,” Danon said.

“Her removal from the UN is long overdue,” he added.

Haley in a statement said: “When someone issues a false and defamatory report in the name of the UN, it is appropriate that the person resign.

“UN agencies must do a better job of eliminating false and biased work, and I applaud the secretary general’s decision to distance his good office from it,” she added.

Khalaf’s analysis showed that “Israel is guilty of imposing an apartheid regime on the Palestinian people, which amounts to the commission of a crime against humanity”.

Dujarric said the report had been withdrawn from the ESCWA website at the request of Guterres because it was done without consultations with the UN secretariat.

He also denied that the UN chief had accepted Khalaf’s resignation under pressure.

“This is not about pressure. This is about the secretary general having the authority to manage the organisation in a way that is done effectively and that can deliver on its goals,” Dujarric said.

“The secretary general cannot accept that an under-secretary-general or any other senior UN official who reports to him would authorise the publication under the UN logo without consulting the competent departments and even himself.”

Dujarric insisted the report’s findings were not the issue.

“It’s not about content... it is about following process,” he said.

“The secretary general has been very clear in his advocacy for the rights of the Palestinian people. From the start of his mandate, he has been advocating for a two-state solution and against any unilateral moves that would undermine that goal.”

ESCWA, which works to strengthen cooperation and promote development, is based in Beirut and comprised of 18 Arab countries, according to its website, which lists the state of Palestine as a full member.

On Wednesday, Haley said in a statement that “the United States is outraged by the report”, branding it “anti-Israel propaganda”.

One of the authors is Richard Falk, a former special UN rapporteur on Palestinian human rights.

Haley in Wednesday’s statement described Falk as “a man who has repeatedly made biased and deeply offensive comments about Israel and espoused ridiculous conspiracy theories”.