Sunni-ruled monarchies sided with the protesters in March 2011, when the war started with the brutal repression of anti-govt demonstrations. 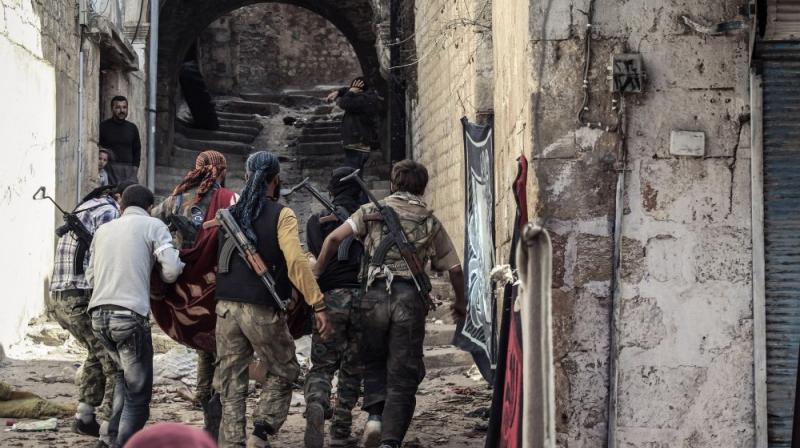 Qatar led most mediation efforts to obtain the release of hostages held by the group formerly known as Al-Nusra Front. (Photo: representational/AP)

Beirut: A diplomatic crisis pitting Saudi Arabia against Qatar has put Syrian rebels in a difficult position, analysts say, after rivalries between Gulf backers had already weakened the opposition.

Both Sunni-ruled monarchies sided with the protesters in March 2011, when the war started with the brutal repression of anti-government demonstrations.

They continued supporting the mostly Sunni rebels when unrest spiralled into conflict between the armed opposition and troops loyal to President Bashar al-Assad, who hails from the country's Alawite Shiite minority and is backed by Saudi Arabia's arch-rival Iran.

But six years later, the rebellion has been plagued by rivalries between Riyadh and Doha, as well as weakened by Russia's military intervention in support of Assad's forces. Moscow's support for regime forces led to a series of setbacks for the rebels, including their landmark loss in December of second city Aleppo.

"The current rupture puts the Syrian opposition in a very awkward position politically, as nobody wants to have to take sides publicly nor can afford to alienate either side," said Yezid Sayigh, a senior fellow at the Carnegie Middle East Centre.

A rebel official in the opposition stronghold of Eastern Ghouta outside Damascus said he hoped the crisis between Doha and Riyadh was just "a temporary storm".

"Qatar, Saudi Arabia, Turkey, Jordan and the United Arab Emirates have supported the revolution of the Syrian people and shown solidarity throughout years of tragedy," the rebel official said.

In a sign of the embarrassment the crisis is causing, several rebel groups approached by AFP refused to comment, saying it was a "sensitive" issue. But Sayigh said the latest flare-up in relations between Qatar and Saudi Arabia will have a limited impact on the Syrian conflict.

"It probably won't have a major financial impact, nor a military one since the US and Turkey have stepped up their support for factions that previously were close to Qatar or to Saudi Arabia," Sayigh said. Riyadh "reduced its funding sharply starting" from the summer of 2015 "after it launched its intervention in Yemen" earlier in the year, he said.

Six years into the war, Syria's fractured rebellion controls just around 10 percent of the war-torn country, with backing from Saudi Arabia, Qatar, Turkey, Jordan and the United States.

Pro-Doha rebels including the powerful Ahrar al-Sham group are present in the north of the country. In Eastern Ghouta, pro-Doha opposition groups exist alongside the pro-Riyadh Jaish al-Islam rebel alliance.

Rebels in the south, meanwhile, are trained by Amman and Washington. Another influential player is Syria's former Al-Qaeda affiliate, which now leads the Tahrir al-Sham group and which some analysts and Syrian factions say has links with Qatar, although Doha has denied this.

Qatar led most mediation efforts to obtain the release of hostages held by the group formerly known as Al-Nusra Front. In Eastern Ghouta, even before the Gulf crisis, factions supported by Qatar on one side and Saudi Arabia on the other had already clashed, killing hundreds of fighters.

Raphael Lefevre, a researcher at the University of Oxford, said the latest Saudi-Qatari crisis could well spark further tensions between rival groups in the rebel enclave.

In 2013 and 2014, "Qatar and Saudi Arabia competed for influence within exiled opposition bodies, each by supporting different factions and leaders, something which largely contributed to paralysing and fragmenting the Syrian opposition," he said.

But the consequences of the latest spat "could be much bloodier, especially as the two countries support rival rebel factions in areas already marked by a great degree of opposition infighting and regime violence such as the Eastern Ghouta", Lefevre said.

Syria expert Thomas Pierret however said "local dynamics rather than external patrons determine alliances" in Eastern Ghouta. He said Ahrar al-Sham risked "suffering financially from a reorientation of Qatari politics", even if it continues to enjoy support from Turkey, which has intervened as a mediator in the Gulf dispute.

Syria's exiled political opposition is also fractured. The High Negotiations Committee is based in Riyadh, while the National Coalition work out of Istanbul.