The White House 'strongly' condemned Saturday’s attack, saying 'there must be zero tolerance for terrorism'. 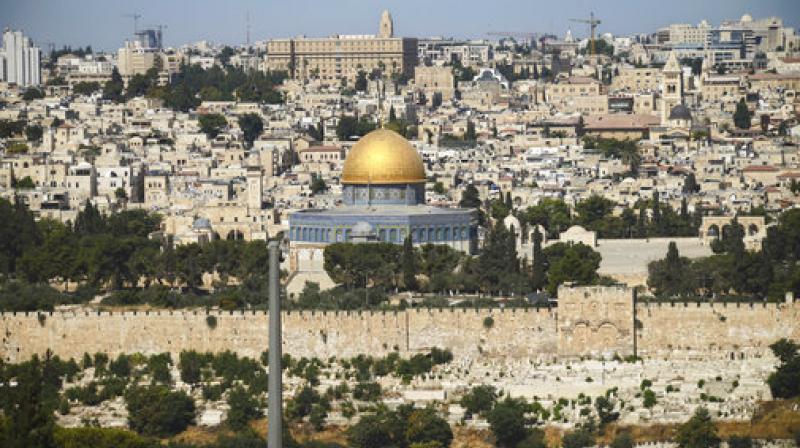 The Dome of the Rock Mosque in the Al Aqsa Mosque compound is seen in Jerusalem's Old City. (Photo: AP)

The decision to reopen the compound, also holy to Jews who call it the Temple Mount, was taken by Prime Minister Benjamin Netanyahu who was leaving for an official visit to France. “It has been decided to reopen the Temple Mount gradually tomorrow (Sunday) for the faithful, visitors and tourists,” the premier’s office said in a statement.

Three Arab Israeli assailants opened fire on Israeli police on Friday the Old City before fleeing to the nearby Haram al-Sharif compound Islam’s third holiest site here they were shot dead by police.

Israeli authorities said they had come from the flashpoint holy site, which includes the Al-Aqsa mosque and the Dome of the Rock, to commit the attack.

The White House “strongly” condemned Saturday’s attack, saying “there must be zero tolerance for terrorism”.

After the attack Israeli authorities took the highly unusual decision to close the holy site for Friday prayers, angering Muslims and drawing the ire of Jordan which administers the compound.

Hundreds of Jordanians, responding to a Muslim Brotherhood call, demonstrated in Amman on Saturday calling for the “liberation of Al-Aqsa”.

Netanyahu had said the compound could reopen on Sunday after security was assessed, and rejected Jordan’s criticism. On Saturday, Israeli security forces locked down parts of Jerusalem’s Old City, restricting access through Damascus Gate, the main entrance used by Palestinians.

Only residents with identification were allowed to pass. “This is not security. This is punishment,” said Bader Jweihan, 53, an accountant who was denied entry.

Musa Abdelmenam Qussam, 73 and with poor eyesight, was helped by a grandson as he walked with a cane and sought to enter. But the owner of a book wholesale shop in the Old City was also turned away.

“This mosque is not only for Muslims. Tourists come,” he said, adding that he usually prays at Al-Aqsa every day. “This city is for all the world. It must be open.”

Jaffa Gate, heavily used by tourists and near the Old City’s Jewish Quarter, was open but with a heavy police presence.

A group of tourists from Poland said they were concerned when they heard about Friday’s shooting but wanted to continue their visit. “It stressed me a little,” said Ewa, who did not want to give her last name.

At Lions Gate near the site of the attack, police guarded the entrance and restricted access, checking IDs. The attack and aftermath was one of the most serious incidents in Jerusalem in recent years.

Hussein was released later on Friday after being questioned, another of his sons said.