Rescue workers of security forces placed bodies in ambulances and cleared away rubble and the carcasses of burnt-out cars from the site. 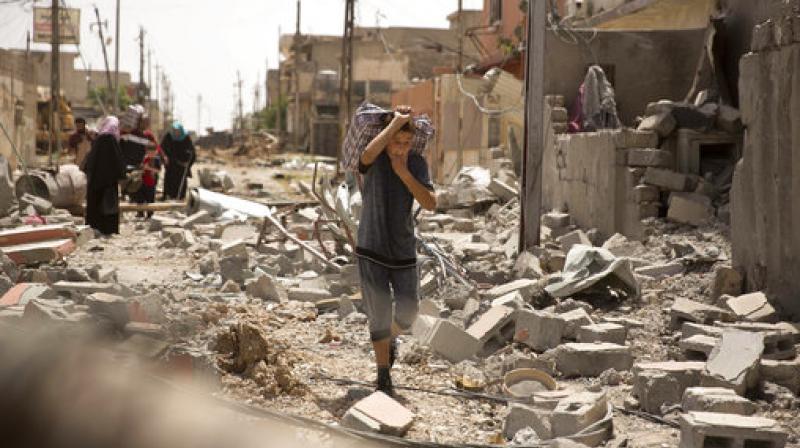 Burned bodies and vehicles including buses and trucks testified to the violence of the attack. (Photo: AP)

Nasiriyah: Gunmen and suicide car bombers on Thursday killed at least 74 people, including Iranians, near the southern Iraqi city of Nasiriyah, in an attack claimed by the Islamic State group.

The attackers struck at midday, opening fire on a restaurant before getting into a car and blowing themselves up at a nearby security checkpoint, officials said.

Abdel Hussein al-Jabri, deputy health chief for the mainly Shiite province of Dhiqar, said at least 74 people had died, including seven Iranians, and another 93 people were wounded.

That was up from the previous toll of 52 dead and 91 wounded in what was already the deadliest IS attack in Iraq since pro-government forces drove the jihadists out of second city Mosul in July.

Security sources said the attackers were disguised as members of the Hashed al-Shaabi, a mainly Shiite paramilitary alliance which has fought alongside the army and police against IS in northern Iraq.

Rescue workers and members of the security forces placed bodies in ambulances and cleared away rubble and the carcasses of burnt-out cars from the site.

Burned bodies and vehicles including buses and trucks testified to the violence of the attack. Shelters built of corrugated metal were reduced to scraps of metal, twisted by heat.

The area targeted is on a highway used by Shiite pilgrims and visitors from neighbouring Iran to travel to the holy cities of Najaf and Karbala further north, although Dhiqar has previously been spared the worst of Iraq's violence.

IS claimed responsibility for the attacks in a statement carried by its Amaq propaganda arm.

- IS claim -
It said several suicide bombers had staged the assault on a restaurant and a security checkpoint, killing "dozens of Shiites".

The Sunni extremist group regularly stages attacks in Iraq, where it has lost swathes of territory to US-backed pro-government forces.

Adding to the pressure on the jihadists, Iraqi forces recaptured the city of Tal Afar and the surrounding region from IS on August 31.

Thursday's attacks come as Iraqi forces backed by tribal fighters closed in one of the last, IS bastions in the country: Al-Qaim area on the border with war-ravaged Syria.

On Wednesday, an AFP correspondent in that area saw several artillery units positioning themselves around the towns of Rawa and Anna, 100 kilometres (60 miles) from the border with Syria.

The group's only other stronghold is Hawija, in Kirkuk province some 300 kilometres north of Baghdad.

IS has suffered a string of defeats on the battlefields of both Iraq and Syria, leaving in tatters the cross-border "caliphate" it declared in 2014.

But despite these setbacks, the extremist group still has hundreds of fighters ready to carry out suicide attacks

In addition, any military offensive in Hawija is expected to be postponed due to a planned referendum on Kurdish independence on September 25.

Acting at the request of Prime Minister Haider al-Abadi, the Iraqi parliament on Thursday sacked the governor of Kirkuk over his decision for the northern province to also take part in the Kurdish referendum.