The blast killed over 170 people, injured more than 6,000 and left thousands homeless 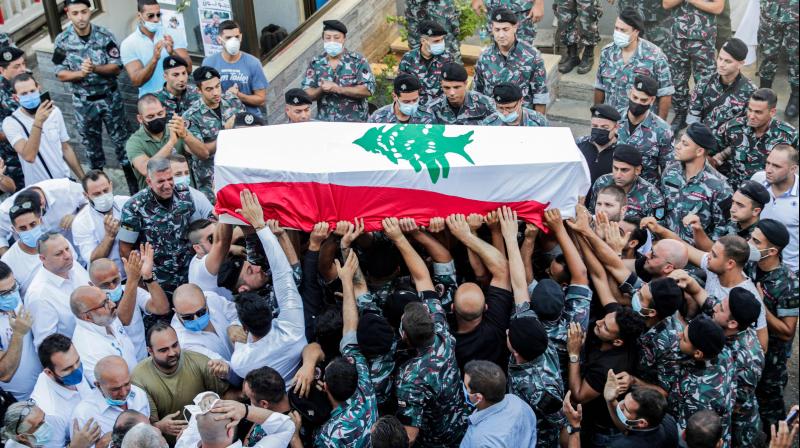 Firefighters carry the coffin of their comrade Ralph Malachi, who was killed in the monster explosion at the port of Beirut and whose remains were recently found and identified, draped in the Lebanese national flag, during a funerary ceremony at the civil defence headquarters in the Karantina (La Quarantaine or Quarantina) neighbourhood of the capital just by the ravaged port. (AFP)

U.N. humanitarian officials said some of the $300 million pledged at a donor conference Sunday co-chaired by French President Emmanuel Macron and the United Nations may be committed to the $565 million appeal, but the amount won’t be known for some time because the pledges include a mixture of humanitarian and reconstruction activities.

The humanitarian office said the appeal will target:

—Rehabilitation of damaged health facilities and provision of trauma kits and essential medicines.

—Cash for shelter for families whose homes were damaged or destroyed and for repairs of common building areas and facilities affected by the blast.

—Repair of schools and provision of educational supplies and psychological support for children.

“The task of rebuilding people’s lives and recovering from the devastation is only just beginning,” said Lebanon’s U.N. humanitarian coordinator, Najat Rochdi.

“I urge the international community to demonstrate their steadfast commitment to the people of Lebanon and repay in turn Lebanon’s incredible generosity to Syrian and Palestine refugees with full financial support for this appeal,” she said.

The U.N. humanitarian office said the appeal seeks funds for costs of the first two phases of what will be a three-phase response — immediate humanitarian needs and the start of recovery and reconstruction, “which will cost billions of dollars and require a mix of public and private finance.”

The third phase will be a response to Lebanon’s socioeconomic crisis before the Beirut explosion, which has been exacerbated by the COVID-19 pandemic, the office said.