Yemen's government and Houthi rebels were in different rooms 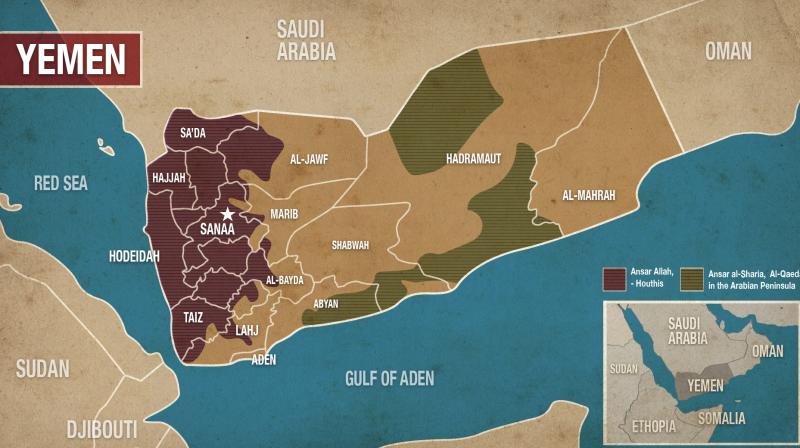 United Nations: The warring parties in Yemen have refused to talk face-to-face during two meetings to discuss the redeployment of forces from the key port of Hodeida, which is to be overseen by a U.N. monitoring team, the United Nations said Monday.

U.N spokesman Stephane Dujarric said retired Dutch Maj. Gen. Patrick Cammaert, the head of the monitoring team, had to shuttle between representatives of Yemen's government and Houthi Shiite rebels who were in different rooms.

Their refusal to sit in the same room was another indication of the lack of trust between the warring parties, and the difficulty in implementing the full agreement that Houthi and government leaders reached in Sweden on December 13. Dujarric said Cammaert is trying to find "a mutually acceptable way forward" to redeploy forces from Hodeida, whose port handles 70 per cent of the food and humanitarian aid imported into Yemen, as well as the smaller ports of Salif and Ras Isa and parts of Hodeida city that are critical for humanitarian efforts.

"Recent discussions have been constructive" and Cammaert "continues to encourage the parties to resume the joint meetings in order to finalize a mutually agreed redeployment plan," Dujarric said.

While U.N envoy Martin Griffiths said last week that the government and Houthis "have largely adhered" to a cease-fire in the port of Hodeida and the surrounding area, he said progress on a pullout of rival forces, humanitarian access and other issues agreed to in Stockholm has been slow. He said new talks between the warring sides would not take place until there was "substantive progress."

Griffiths had said there would be a new round of talks in January but diplomats said he is now looking to February. The Security Council is expected to vote this week on a British-drafted U.N resolution that would establish a political mission headed by Cammaert to oversee implementation of the Stockholm agreement.

The resolution would approve Secretary-General Antonio Guterres' proposal for up to 75 U.N monitors to be deployed for an initial period of six months to oversee the cease-fire in Hodeida, demining operations and the redeployment of forces. U.N. officials said one issue Cammaert has faced since his arrival in Houthi-controlled Hodeida is his lack of freedom of movement on the ground.

The conflict in Yemen began with the 2014 takeover of Sanaa by the Iranian-backed Houthis, who toppled the government of Abed Rabbo Mansour Hadi. A Saudi-led coalition allied with Yemen's internationally recognized government has been fighting the Houthis since 2015. Saudi-led airstrikes have hit schools, hospitals and wedding parties and killed thousands of Yemeni civilians.

The Houthis have fired long-range missiles into Saudi Arabia and targeted vessels in the Red Sea. Yemen, the Arab world's poorest country, has been plunged into the world's worst humanitarian crisis. U.N. humanitarian chief

Mark Lowcock told the Security Council last week that the humanitarian situation had not improved since the Stockholm agreement and "remains catastrophic," with 80 percent of Yemen's population — over 24 million people — now in need of assistance. "They include nearly 10 million people just one step away from famine," he said.