At least 29 children were among those killed in the air raid Thursday on a bus in a crowded market in Dahyan, Saada province. 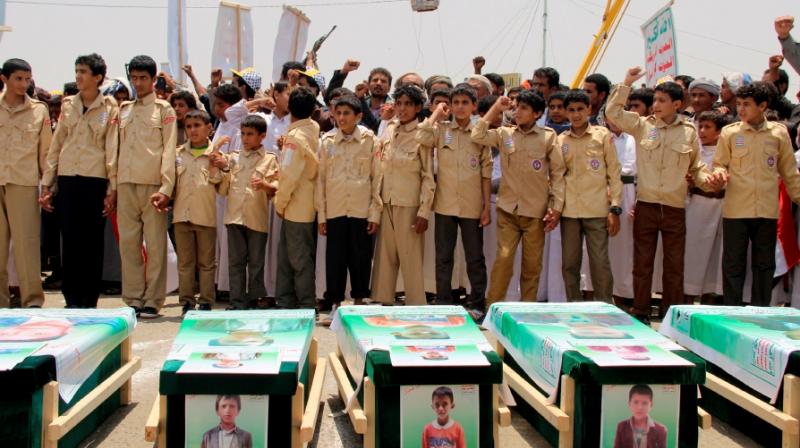 Yemeni children vent anger against Riyadh and Washington on August 13, 2018 as they take part in a mass funeral in the northern Yemeni city of Saada, a stronghold of the Iran-backed Huthi rebels, for children killed in an air strike by the Saudi-led coalition last week. (Photo: AFP)

Saada: Thousands of Yemenis vented anger against Riyadh and Washington on Monday as they took part in a mass funeral for children killed in an air strike by the Saudi-led coalition.

At least 29 children were among those killed in the air raid Thursday on a bus in a crowded market in Dahyan, Saada province, according to the International Committee of the Red Cross.

The mass funeral was held in Saada city, a stronghold of the Iran-backed Huthi rebels, with images broadcast by the rebels' Al-Masirah television.

Around 50 vehicles brought coffins into a large square in the city.

The coffins were covered with green drapes and portraits of the victims were lined up on the ground, where relatives cried over them and the Islamic prayer for the dead was recited.

Mourners raised pictures of the children and shouted slogans against Saudi Arabia and its ally and key arms supplier, the United States.

The Saudi-led coalition has taken part in Yemen's conflict since 2015 in support of President Abedrabbo Mansour Hadi's government in its fight against the Huthis.

The head of the rebels' revolutionary council, Mohammed Ali al-Huthi, took part in the funeral and slammed the raid as a "crime by America and its allies against the children of Yemen".

The Huthis' health ministry said that 51 people were killed in the raids including 40 children.

It also said 79 others were wounded, including 56 children. Al-Masirah did not say how many victims were buried on Monday.  Some families had already buried their loved ones, according to residents.

The coalition said Friday it would launch a probe to "assess the events (and) clarify their circumstances", while the United Nations Security Council has called for a "credible investigation".

The UAE, a key Saudi ally in the coalition battling the Huthis, on Monday said that both sides in the conflict had been to blame.

Anwar Gargash, the UAE's minister of state for foreign affairs, bemoaned the "ugly" side of war and played up the coalition's own probe into the strike.

"In this war we have seen civilians shot at, bombed, killed and, unfortunately, this is really part of any confrontation," he said in Dubai.

US Secretary of State Mike Pompeo and Saudi Crown Prince Mohammed bin Salman spoke by telephone on Monday, discussing topics including efforts by a UN special envoy to "to resolve the conflict in Yemen", the State Department said.

The war in impoverished Yemen has left nearly 10,000 people dead and unleashed what the UN describes as the world's worst humanitarian crisis.

The UN envoy to Yemen, Martin Griffiths, has invited the warring sides to talks on September 6 in Geneva.