The Israeli army said on Friday that it ‘holds Hamas responsible for all events transpiring within the Gaza Strip and emanating from it.’ 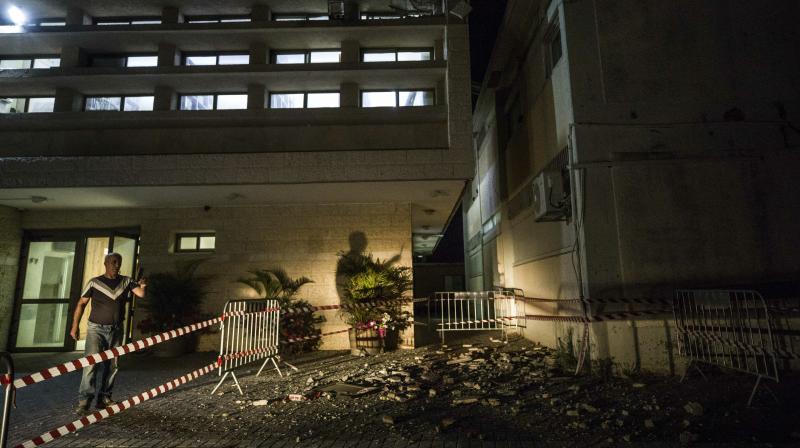 The seminary, in the town of Sderot, was empty at the time of the rocket attack as students had left to return to their homes elsewhere to celebrate the Jewish Sabbath, which begins on Friday with their families. (Photo: AP)

There were no reported casualties on either side. "Last night, a rocket was launched from the Gaza Strip into Israeli territory," Friday's military statement said.

It said that in response the Israeli Air Force "fighter jets and aircraft targeted terror infrastructure in military compounds and a Hamas naval force military compound as part of a strike on a number of Hamas terror sites throughout the Gaza Strip."

The seminary, in the town of Sderot, was empty at the time of the rocket attack as students had left to return to their homes elsewhere to celebrate the Jewish Sabbath, which begins on Friday with their families. "If the rocket had hit a few hours earlier there would have been a disaster," former defence minister Amir Peretz, a Sderot resident, said in an interview on Friday with Israeli public radio.

Israeli police said the building was damaged when it was hit "with full force". The Sderot incident came hours after Israeli warplanes bombed bunkers at a Hamas base in southern Gaza on Thursday, causing no casualties, according to a Palestinian security source.

That strike came after Israeli air defences intercepted a previous rocket launched from Gaza, the first since hundreds were fired from the enclave in early May in a flare-up which killed 25 Palestinians and four Israelis.

Israeli authorities on Wednesday announced a ban on fishing off Gaza, in response to the launching of balloons, fitted with incendiary devices, into Israeli territory to set fire to farmland. "Due to the continuous launching of incendiary balloons and kites from the Gaza Strip towards Israel ... not to allow access to Gaza's maritime space until further notice," the Israeli defence ministry department responsible for Palestinian civil affairs, COGAT, said.

A spokesman for the Israeli fire service said incendiary balloons from Gaza caused seven fires on Tuesday alone. In the past year, Palestinians have succeeded in setting fire to large areas of farmland in southern Israel.

Gaza's Islamist rulers Hamas and Israel have fought three wars since 2008. And there are mounting concerns that another flare-up could occur ahead of Israel's September 17 elections.

The Israeli army said on Friday it "holds Hamas responsible for all events transpiring within the Gaza Strip and emanating from it."