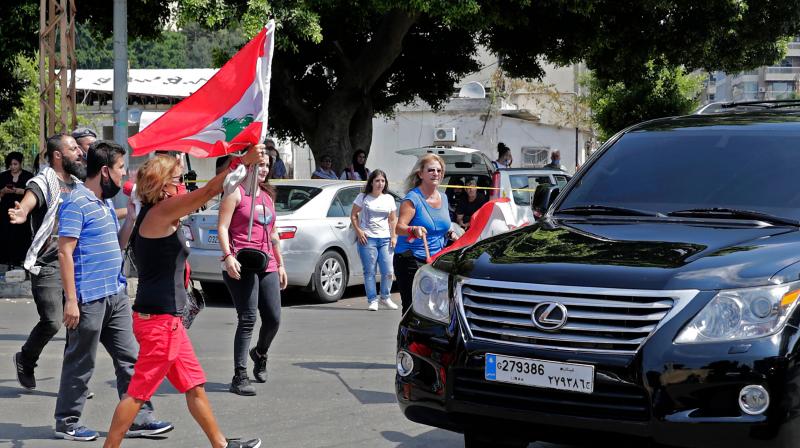 Lebanese anti-government protesters attack a vehicle belonging to a member of the parliament upon his arrival to the parliamentary session at the UNESCO Palace in Beirut. (AFP)

Beirut: Lebanon's Parliament met Thursday in the first session since the tragic explosion last week that changed the face of the capital and forced the government to resign.

Parliament is convening outside its regular location to observe social distancing amid a coronavirus surge and because of continuous protests outside the Parliament building by angry Lebanese who want the entire political class step down. More protests were expected Thursday.

The session opened with a moment of silence for the more than 170 people killed in the blast.

It then moved to discuss the resignation of nearly a dozen lawmakers who quit last week in protest of the government's handling of the August 4 blast, which also left more than 6,000 injured. A major Christian party bloc is boycotting the session.

It still was not known what caused the fire responsible for igniting nearly 3,000 tons of ammonium nitrate stored in Beirut's port.

But documents have emerged in the wake of the explosion that show the country's top leadership and security officials were aware of the chemicals being stored in the city port.

The explosion has fueled outrage and protests against top political leaders and led to the resignation of the government Monday. The Cabinet is now in a caretaker capacity.

The state of emergency puts the military in charge of security and gives it wide powers to oversee media, use military trials and hold detainees for prolonged periods.

Rights groups and critics say Lebanon doesn't need a state of emergency since it has been in a state of general mobilisation since the outbreak of the coronavirus, which give the government wide ranging powers.

Lebanon's political landscape has been shaken by the blast. Before resigning, the caretaker prime minister proposed early elections, an idea that was not supported by the Parliament speaker and other political groups.

Since the resignation, there has been a flurry of closed-door meetings and political haggling to form a government that meets the approval of domestic and international powers.

Lebanon's complicated sectarian-based political system requires the prime minister to be chosen from among Sunni Muslims.

It wasn't clear if there would be a national unity government  which would mean the participation of all political parties or an emergency transition government.

France's defense minister was due to arrive in Beirut on Thursday amid a flurry of foreign visits to the stricken country.

France has been leading efforts to help Lebanon emerge from the drastic blow, including talking to political parties to hasten the formation of a new government.

Also on Thursday, U.S. Under Secretary for Political Affairs David Hale was due to arrive in Lebanon for a two-day visit. Hale is expected to reiterate the American government's commitment to assist the Lebanese people in recovering from the tragedy and rebuilding their lives, a statement by the U.S. Embassy said.