Despite a truce last year backed by UN, Egypt and Qatar, the two sides clash sporadically with rockets, mortar fire or incendiary balloons 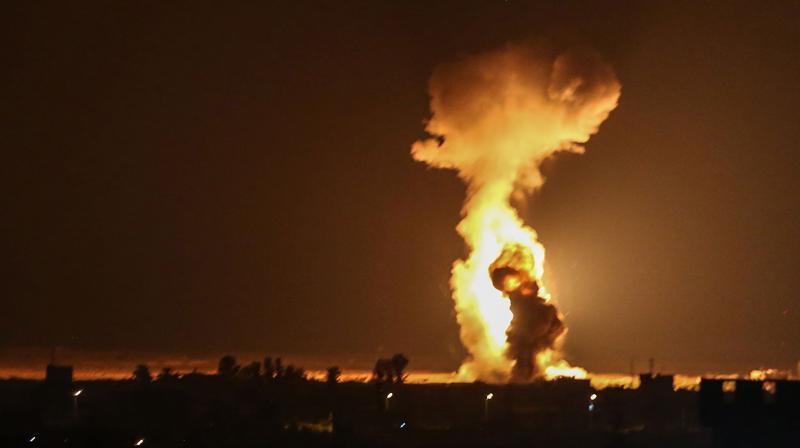 Smoke and flames rise after war planes belonging to the Israeli army carried out airstrikes over the southern Gaza Strip city of Rafah. (AFP)

Gaza City: Israel's military said Thursday it had carried out fresh overnight strikes on Hamas targets in the Gaza Strip, in response to incendiary balloons launched across the border from the Palestinian enclave.

The latest round of hostilities has seen firebombs attached to bunches of balloons floating into Israel, setting scrubland ablaze. Sometimes kites are used in the makeshift attacks.

In response, Israel has closed a goods crossing with Gaza and slashed the territory's permitted coastal fishing zone, as well as launching air strikes on sites owned by the enclave's Islamist rulers Hamas.

"Over the last week, explosive balloons are being launched from the Gaza Strip into Israeli territory," the Israeli Defence Force (IDF) said in a statement early Thursday.

"In response, a short while ago, IDF fighter jets and tanks struck a number of Hamas military targets in the Gaza Strip."

The army said the strikes were aimed at a military compound and observation posts used by Hamas militants, who also fired a volley of rockets into the sea this week after repeated exchanges of fire.

They said the strikes caused severe damage to the sites and some damage to citizens' homes, but did not report any injuries.

Israeli fire services in the south of the country reported 60 fires caused by balloons on Tuesday, and 24 on Wednesday, without recording any casualties.

Hamas and Israel have fought three wars since 2008.

Despite a truce last year backed by the UN, Egypt and Qatar, the two sides clash sporadically with rockets, mortar fire or incendiary balloons.

The Gaza Strip has a population of two million, more than half of whom live in poverty, according to the World Bank.

Palestinian analysts say fire from Gaza often aims to pressure Israel to give the green light for the transfer of Qatari financial aid into the strip.