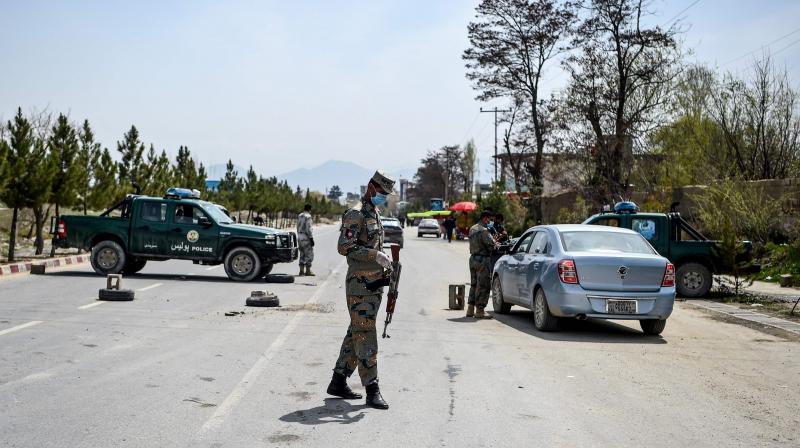 Security personnel wearing facemasks stop motorists at a checkpoint during a government-imposed lockdown as a preventive measure against the COVID-19 coronavirus in Kabul. (AFP)

Kabul: Seven police officers were killed when their checkpoint was attacked in central Afghanistan, officials said on Saturday, blaming the Taliban for the assault.

The attack happened late on Friday in Pasaband district of Ghor province, said district police chief Fakhruddin, who goes by one name.

"They killed seven police officers and wounded one. One policeman is missing," he said, adding that the suspected Taliban attackers had seized guns and ammunition.

The attack was confirmed by the deputy governor of Ghor, Habibullah Radmanish, who also blamed the insurgent group.

No one has yet claimed responsibility for the attack, which came hours after four people were killed in a blast at a mosque in Kabul during Friday prayers.

The latest bloodshed comes as the Taliban and the Afghan government appear to move closer towards potential peace negotiations.

The much-delayed talks aimed at ending the conflict are expected to begin once the two sides complete an ongoing prisoner swap, accelerated after a brief ceasefire last month.

The rare truce to mark the Eid al-Fitr holiday has been followed by an overall drop in violence across the country, though authorities have blamed the Taliban for a number of attacks in recent weeks.

"While the government has continued to advance the cause of peace, the Taliban continued their campaign of violence against the Afghan people during Eid and the weeks after that," Javid Faisal, spokesman of the National Security Council tweeted on Saturday.

"In the last two weeks, they killed 89 civilians and wounded 150 across 29 provinces."

The Taliban have largely refrained from launching major attacks on Afghan cities since February when they signed a deal with the US meant to pave the way for peace talks with the Kabul government.