A look at Palmyra: Historic Syrian city retaken by ISIS 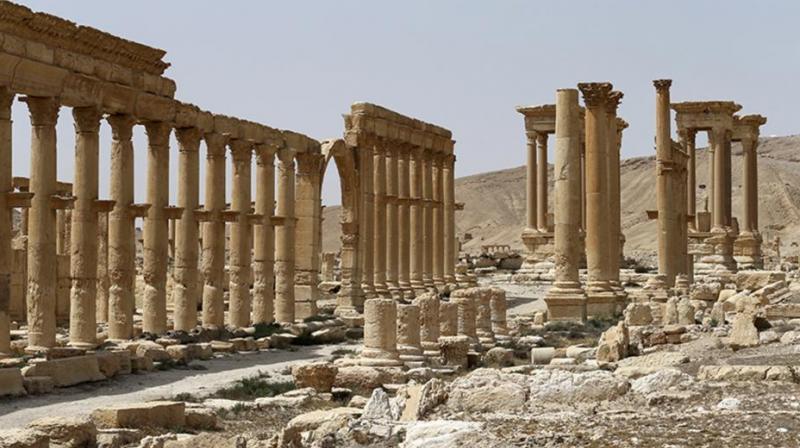 A desert oasis surrounded by palm trees in central Syria, Palmyra is also a strategic crossroads linking the Syrian capital, Damascus, with the country’s east and neighbouring Iraq. (Photo: AP)A look at Palmyra, the archaeological gem that Islamic State fighters retook Sunday from Syrian troops in a major advance. (

Beirut: A look at Palmyra, the archaeological gem that Islamic State fighters retook Sunday from Syrian troops in a major advance after a year of setbacks in Syria and neighboring Iraq.

A desert oasis surrounded by palm trees in central Syria, Palmyra is also a strategic crossroads linking the Syrian capital, Damascus, with the country’s east and neighbouring Iraq. Located 155 miles (215 kilometers) east of Damascus, the city was once home to 65,000 people before the Syrian civil war began. The Islamic State group captured the city in May 2015 and held it until May 2016, when they were forced out by a Syrian and Russian military campaign. However, most Palmyra residents did not return after it was retaken by the government. Activists estimated the city is now home to a few hundred families.

A UNESCO world heritage site, Palmyra boasts 2,000-year-old towering Roman-era colonnades and priceless artifacts. Syrians affectionately refer to it as the “Bride of the Desert.”

Palmyra was the capital of an Arab client state of the Roman Empire that briefly rebelled and carved out its own kingdom in the 3rd Century, led by Queen Zenobia. Before the war, it was Syria’s top tourist attraction, drawing tens of thousands of visitors each year.

Palmyra was first mentioned in the archives of Mari in the 2nd millennium B.C., according to UNICEF’s website. The town was the hub of a network of caravan trails that carried silks and spices from eastern Asia to the Mediterranean.

Palmyra became a prosperous region during the Hellenistic period and later became part of the Roman Empire. But its rebellious Queen Zenobia challenged Rome’s authority. The city was plundered in A.D. 272 after she was captured during a long siege.

In more recent times, Palmyra has had darker associations for Syrians. It was home to the Tadmur prison, a notorious facility where thousands of opponents of President Bashar Assad’s government were reportedly tortured. IS demolished the prison when it first controlled the city.

Last year, IS destroyed the Temple of Bel, which dated back to A.D. 32, and the Temple of Baalshamin, a structure of stone blocks several stories high fronted by six towering columns. The militants also blew up the Arch of Triumph, which had been built under the Roman emperor Septimius Severus between A.D. 193 and A.D. 211. Maamoun Abdulkarim, Syria’s head of the Antiquities and Museums Department based in Damascus, said despite the destruction, some 80 percent of the ancient ruins remained intact.

The extremists have destroyed ancient sites across their self-styled Islamic caliphate in Syria and Iraq, viewing them as monuments to idolatry. In August, IS militants beheaded Khaled al-Asaad, an 81-year-old antiquities scholar who had devoted his life to studying Palmyra. His body was later hung from a Roman column.

Over the last year, IS has suffered a string of defeats in both Syria and Iraq, losing several towns and cities it had captured in 2014. It is now under attack in Mosul, the last major urban center it controls in Iraq. A Kurdish-led Syrian force, backed by the U.S., is also pushing toward Raqqa, the group’s de-facto capital in Syria, from the north. Meanwhile, Turkey is backing Syrian opposition fighters who have reached the outskirts of al-Bab, the IS stronghold in northern Syria.

In going for Palmyra, IS picked a soft target to demonstrate that despite its battlefield losses, it retains the ability to carry out large attacks.

With its losses in Iraq and elsewhere in Syria, the militants are eyeing new terrain. Mohammed Hassan al-Homsi, a native of the city who runs Palmyra News Network, said they chose Palmyra for its desert terrain linked to Iraq’s and its surrounding oil and gas fields. It is also steering away from Syria’s north, where the various anti-forces have focused their fight.

The extremist group also appeared to be taking advantage of the Syrian and Russian preoccupation with Aleppo, timing its attack to coincide with a massive government offensive to capture the last remaining opposition-held neighbourhoods in the northern city.