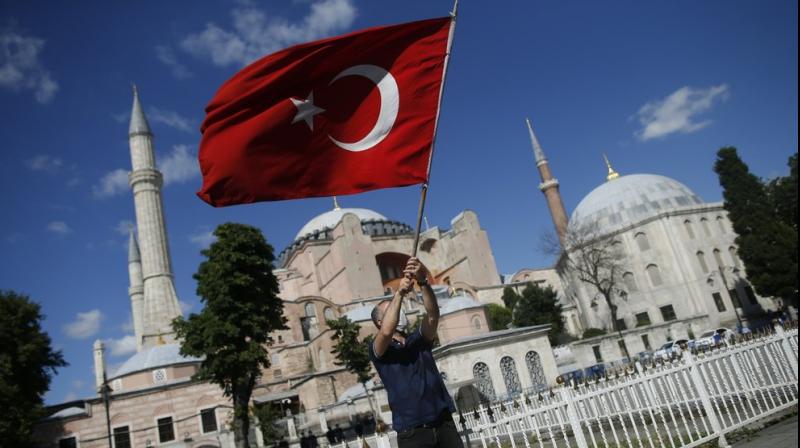 A man waves a Turkish flag outside the Byzantine-era Hagia Sophia, one of Istanbul's main tourist attractions in the historic Sultanahmet district of Istanbul, following Turkey's Council of State's decision. (AP)

Frankfurt: The head of the World Council of Churches has written to Turkey’s president expressing his “grief and dismay” over Turkey’s decision to change the status of Istanbul’s landmark Hagia Sophia from a museum to a mosque.

As a World Heritage museum, “Hagia Sophia has been a place of openness, encounter and inspiration for people from all nations,” interim secretary general Ioan Sauca said in the letter released Saturday by the Geneva-based group.

The colossal Hagia Sophia was built 1,500 years ago as an Orthodox Christian cathedral and was converted into a mosque after the Ottomans conquered Constantinople, now Istanbul, in 1453. The secular Turkish government decided in 1934 to make it a museum, and millions of tourists now visit the landmark annually.

Turkish President Recep Tayyip Erdogan formally converted the building back into a mosque Friday and declared it open for Muslim worship hours after a high court annulled the 1934 government decision.

Sauca said the museum status had been “a powerful expression” of Turkey’s commitment to inclusion and secularism. He urged Erdogan to reconsider the decision “in the interests of promoting mutual understanding, respect, dialogue and cooperation, and avoiding cultivating old animosities and divisions.”

The WCC says its membership comprises 350 Protestant, Orthodox and Anglican churches with some 500 million believers.

Erdogan, a devout Muslim, has frequently used the debate over Hagia Sophia to drum up support for his Islamic-rooted party. The decision has provoked deep dismay among Orthodox Christians and strong criticism from neighbor and rival Greece.

“These decisions cast doubt on one of the most symbolic acts of modern and secular Turkey,” the minister said in a statement.

“The integrity of this religious, architectural and historic jewel, a symbol of religious freedom, tolerance and diversity, listed as a UNESCO World Heritage Site, must be preserved,” he said. “Hagia Sophia must continue to represent the plurality and diversity of religious heritage, dialogue and tolerance.”

The U.S. State Department has said it was “disappointed” by the decision and looks forward to seeing how Turkey plans to keep the landmark open to all.