The developments came after a week that saw violent clashes along the Israel-Gaza border. 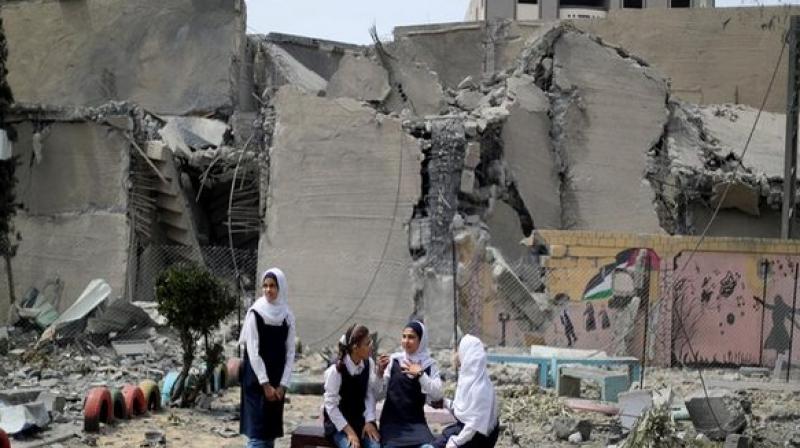 Palestinian students inside their damaged school nearby a building that was destroyed by Israeli airstikes, in Gaza. (Photo: ANI)

Tel Aviv: Israel reopened its main border crossings with the Gaza Strip on Saturday as part of a ceasefire agreement.

The developments came after a week that saw violent clashes along the Israel-Gaza border which remained closed for the Memorial Day and Independence Day holidays from May 7 to 9, The Times of Israel reported.

"Tomorrow (Sunday), the Erez and Kerem Shalom Crossings will be opened, according to regular operating hours," COGAT, the Israeli military body responsible for the Palestinian territories, said in a statement on Saturday night.

Erez, in northern Gaza, is the main terminal for civilian traffic, while Kerem Shalom in the south of the Strip mainly serves commercial goods.

The move came days after Israel on Friday removed restrictions on a 12-mile Palestinian fishing zone off the Gaza Strip, keeping to an Egypt-brokered ceasefire imposed during the deadly flare-up of violence earlier this week.

According to Al Jazeera, at least four Israelis and 25 Palestinians, including two pregnant women and three children, were killed during the violence.

Palestinians shot almost 700 projectiles into Israel on May 4 and 5, while Israel responded with hundreds of airstrikes.

However, Israel Prime Minister Benjamin Netanyahu has repeatedly said that the fighting in Gaza has not yet ended.

Israeli authorities have further warned that the fighting could resume soon after in the absence of measures aimed at easing humanitarian assistance to those in the Gaza Strip.