Omari, who served as an adviser to Palestinian negotiators in later talks, has no illusions about the current state of the peace process. 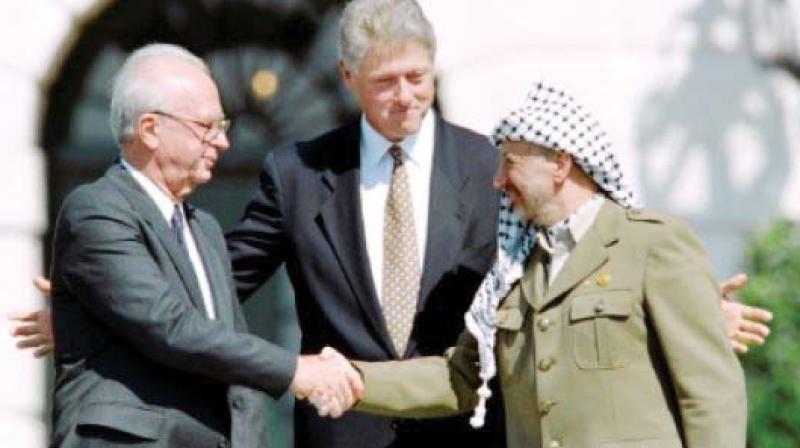 Then US President Bill Clinton stands between PLO leader Yasser Arafat and Israeli Prime Minister Yitzhak Rabin as they shake hands on September 13, 1993 at the White House after signing the Oslo Accords. (Photo: AFP)

Jerusalem: A handshake on the White House lawn sealing the first of the landmark Oslo accords inspired hope that Israeli-Palestinian peace could finally be achieved, but 25 years later, those dreams have faded.

The September 13 anniversary of the 1993 accord, symbolised by the handshake between Yitzhak Rabin and Yasser Arafat, will not be celebrated by most Israelis or Palestinians, many of whom see unfulfilled promises or a process that was flawed from the start.

But for those who regard an Israeli and Palestinian state existing side-by-side as the only viable solution, salvaging the peace process and the achievements of the Oslo accords, a second followed in 1995, is more urgent than ever.

“It was a defining moment for many of us,” said Ghaith al-Omari, a Palestinian student in Jordan at the time and now a senior fellow at The Washington Institute for Near East Policy think-tank.

Omari, who served as an adviser to Palestinian negotiators in later talks, has no illusions about the current state of the peace process.

“On the long-term, there is no solution except the two-state solution,” he said.

“In the short-term, there is absolutely no chance that it’s going to happen.”

His view is widely shared, with Omari and others pointing to what they see as Israel’s drift to the political right, a weakened Palestinian leadership and US President Donald Trump’s moves.

Trump has pledged to reach the “ultimate deal”, Israeli-Palestinian peace, but has declined to commit to a two-state solution, for years the focus of international diplomacy.

He has also sided with Israel on core issues in the conflict, such as recognising the disputed city of Jerusalem as its capital, without publicly asking for any concessions in return.

On Monday, Palestinian officials said they had been informed that the White House was closing their mission in Washington over a bid to have Israel prosecuted for war crimes at the International Criminal Court.

Such moves have delighted Israeli right-wing politicians, who oppose a Palestinian state and argue that the Oslo accords only led to another Palestinian intifada and more violence.

But the Palestinians, who have cut off contact with Trump’s White House, say Israel failed to abide by the accords, notably by allowing hundreds of thousands more settlers in the West Bank, which it has occupied since 1967.

The Palestinian leadership, however, remains deeply divided between 83-year-old president Mahmud Abbas’s Fatah party and the Islamist movement Hamas, which controls the Gaza Strip and refuses to recognise Israel.

Benny Morris, a renowned Israeli historian whose books include “Righteous Victims: A History of the Zionist-Arab Conflict, 1881-2001”, faults Israel’s drift to the right, but believes the Palestinians are not prepared to fully accept a two-state solution.

“I think something has to happen in the leaderships of the two people,” he said.

“Israelis have to get rid of this leadership, which is unable to move towards peace, unable to adopt a two-state formula as a basis for peace.”

But the Palestinians “have to get rid of the Hamas leadership, and the Fatah leadership pretends to want peace, but doesn’t actually want it”.

The Oslo accord of 1993 stated that “it is time to put an end to decades of confrontation and conflict” and “strive to live in peaceful coexistence”.

While it did not specifically mention the creation of a Palestinian state, it led to mechanisms for self-governance, including the Palestinian Authority, which has endured.

As part of the agreements, the Palestine Liberation Organisation recognised Israel, while Israel recognised the PLO as the Palestinians’ legitimate representative.

That in itself was a major achievement at the time, following decades of enmity.

But since, Israelis and Palestinians have been scarred by further tragedy.

Rabin was assassinated by an Israeli right-wing extremist in 1995 and the five-year transitional period under Oslo that was supposed to lead to a permanent settlement expired with no deal in place.

A second Palestinian intifada erupted in 2000, and since Hamas took control of the Gaza Strip in 2007, it has fought three wars with Israel.

Israeli settlement building has multiplied in the West Bank, on land the Palestinians see as part of their future state.

Some 600,000 Israeli settlers now live there and in annexed east Jerusalem, which the Palestinians want as their capital.

Prime Minister Benjamin Netanyahu also now heads what is seen as the most right-wing government in Israel’s history.

Key members of his coalition want to see most of the West Bank become part of Israel despite warnings that it would lead to an “apartheid” arrangement with the Palestinians there.

Morris, who has spent much of his life documenting the conflict, still believes the two-state solution is the only way forward, but admitted he is pessimistic.

“I really don’t know,” he said. “I used to think it would be achieved. Now I’m not very optimistic about it ever happening.”