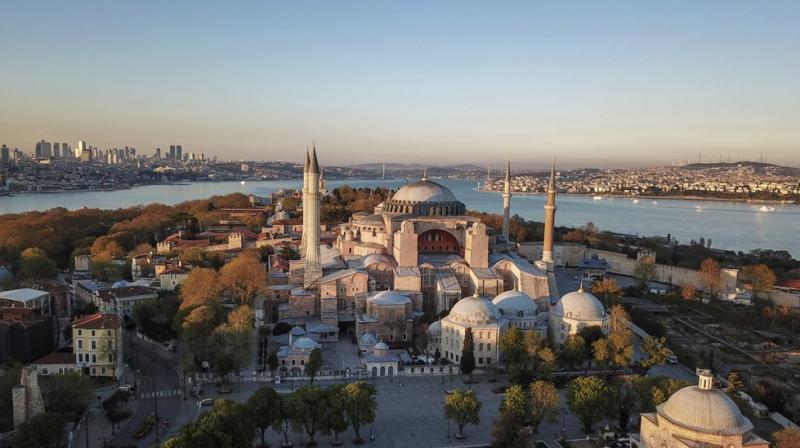 Aerial view of the Byzantine-era Hagia Sophia, one of Istanbul's main tourist attractions in the historic Sultanahmet district of Istanbul. (AP)

Ankara: The president of Turkey on Friday formally converted Istanbul’s sixth-century Hagia Sophia back into a mosque and declared it open for Muslim worship, hours after a high court annulled a 1934 decision that had made the religious landmark a museum.

The decision sparked deep dismay among Orthodox Christians. Originally a cathedral, Hagia Sophia was turned into a mosque after Istanbul’s conquest by the Ottoman Empire but had been a museum for the last 86 years, drawing millions of tourists annually.

There was jubilation outside the terracotta-hued structure with its cascading domes and four minarets. Dozens of people awaiting the court’s ruling chanted “Allah is great!” when the news broke. A large crowd later prayed outside it.

In the capital of Ankara, legislators stood and applauded as the decision was read in Parliament.

Turkey’s high administrative court threw its weight behind a petition brought by a religious group and annulled the 1934 Cabinet decision that turned the site into a museum. Within hours, President Recep Tayyip Erdogan signed a decree handing over Hagia Sophia to Turkey’s Religious Affairs Presidency.

In a televised address to the nation, Erdogan said the first prayers inside Hagia Sofia would be held on July 24, and he urged respect for the decision.

“I underline that we will open Hagia Sophia to worship as a mosque by preserving its character of humanity’s common cultural heritage,” he said, adding: “It is Turkey’s sovereign right to decide for which purpose Hagia Sofia will be used.”

He rejected the idea that the decision ends Hagia Sophia’s status as a structure that brings faiths together.

“Like all of our other mosques, the doors of Hagia Sophia will be open to all, locals or foreigners, Muslims and non-Muslims,” Erdogan said.

Erdogan had spoken in favour of turning the hugely symbolic UNESCO World Heritage site back into a mosque despite widespread international criticism, including from U.S. and Orthodox Christian leaders, who had urged Turkey to keep its status as a museum symbolizing solidarity among faiths and cultures.