Israel to invest USD 68.6 million to boost cooperation with India

The Indian Prime Minister will be hosting a private dinner for Netanyahu on January 14 after his arrival in New Delhi. 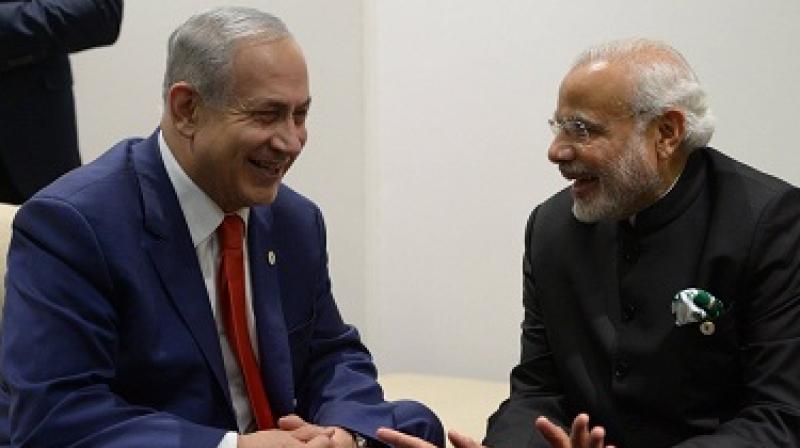 Several MoUs, including in the field of oil and gas, renewable energy, amended protocol for airports, cyber security, co-production of films and documentaries will be signed between the two sides. (Photo: PTI)

Jerusalem: Israel will invest USD 68.6 million to boost cooperation with India in areas like tourism, technology, agriculture and innovation over a period of four years, a senior official in Jerusalem has said ahead of Prime Minister Benjamin Netanyahu’s high-profile India visit next week.

The commitment is in addition to the India-Israel Industrial R&D and Technological Innovation Fund of USD 40 million over five years with equal contribution from both sides that has already been agreed between the two sides, deputy Director General of Israel’s Foreign Ministry, Gilad Cohen, told PTI.

Netanyahu will be leading a high-profile delegation comprising 130 businessmen from 102 Israeli companies drawn from areas like agriculture, water, cyber security, health care and security on his four day trip to India starting January 14.

It will be the second visit by an Israeli Prime Minister to India after a gap of 15 years since Ariel Sharon visited New Delhi in 2003. The visit comes merely six months after Prime Minister Narendra Modi visited the Jewish state, becoming the first Indian premier to do so.

Several MoUs, including in the field of oil and gas, renewable energy, amended protocol for airports, cyber security, co-production of films and documentaries will be signed between the two sides.

Israel’s Saare Tzedek hospital would be signing an agreement with India’s Ministry of Health and Family Welfare as well.

Reciprocating the warm reception extended to him by Netanyahu, Modi is likely to spend a lot of time with his Israeli counterpart during the trip.

The Indian Prime Minister will be hosting a private dinner for Netanyahu on January 14 after his arrival in New Delhi. The Israeli leader would be meeting External Affairs Minister Sushma Swaraj also the same day.

The Israeli Prime Minister would be formally welcomed the next day at the Rashtrapari Bhawan following which he would lay wreath at Rajghat.

He would be then participating in a dialogue at Hyderabad house which will also include a one-on-one discussion with Modi. Meetings with President Ram Nath Kovind and Vice President Venkaiah Naidu are also scheduled for Monday.

Netanyahu, accompanied by his wife Sara, would be travelling to Agra to see the Taj Mahal on Tuesday and return to Delhi to participate in the Raisina Dialogue.

Modi would be accompanying Netanyahu to Gujarat on Wednesday where he will be welcomed in the same fashion as Japan’s Prime Minister Shinzo Abe was with a “road show” in Ahmedabad.

The “road show” is said to be an 8-kilometer drive from the airport to the Sabarmati Ashram. The two leaders will also be witnessing several innovative technologies in the field of water, agriculture and health at iCreate and visit a Centre of Excellence.

Netanyahu would be arriving in Mumbai on Wednesday in the evening where he would be meeting with the Indian Jewish community.

A packed schedule on Thursday for the Israeli Prime Minister in Mumbai would include a “power breakfast” with Indian business leaders, a business seminar, attending two memorial services for the victims of Mumbai terror attacks at the Taj hotel and Nariman House and finally a gala event with Bollywood actors, directors and producers.