In Damascus, dozens of Syrian students gathered outside the UN offices to protest the US missile attack. 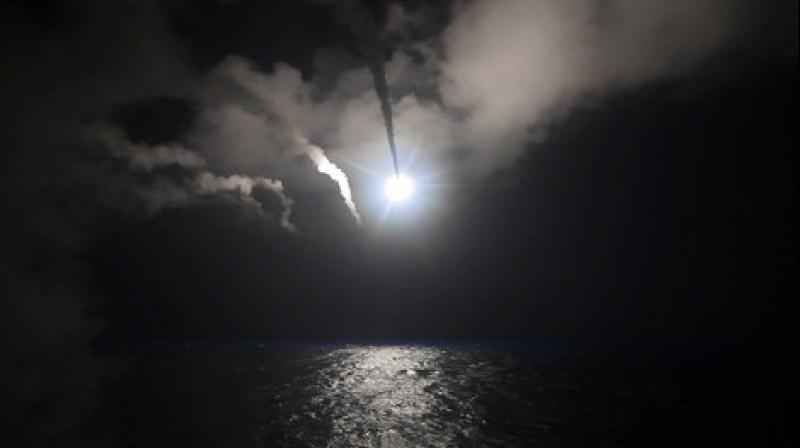 The US missile attack has caused heavy damage to one of Syria's biggest and most strategic air bases, used to launch warplanes to strike opposition-held areas in central, northern and southern Syria. (Photo: AP)

Beirut: Warplanes on Saturday struck the Syrian town where a chemical attack had killed scores of people earlier this week, as Turkey warned that a retaliatory US missile strike on a Syrian air base would only be "cosmetic" if greater efforts are not made to remove President Bashar Assad from power.

The air strikes on the opposition-held northern town of Khan Sheikhoun, where 87 people were killed in the chemical attack earlier this week, killed a woman and wounded her son, according to the Britain-based Syrian Observatory for Human Rights and the Local Coordination Committees, an activist collective.

Elsewhere in Syria, US-led air strikes killed at least 21 people, including a woman and her six children who were fleeing on a boat across the Euphrates River near the Islamic State group's self-styled capital, Raqqa, the target of a major offensive by US-backed and Kurdish-led Syrian forces, activists said.

An air strike on a rebel-held town in the northern Idlib province killed at least 18 people, including women and children, according to the Observatory and Ariha Today, an activist group. It was not immediately clear who carried out the strike.

Near the central city of Homs, a bomb exploded aboard a bus carrying workers, killing a woman and wounding more than 20, according to state TV and the Observatory.

The chemical attack prompted the US to launch nearly 60 Tomahawk missiles on a Syrian air base early on Friday, which killed nine people and marked the first time Washington has directly targeted Syrian government forces since the war began in 2011.

The move was welcomed by the Syrian opposition and its main backers, including Turkey and Saudi Arabia, but harshly condemned by Russia and Iran, who back Assad and said striking his forces would complicate the struggle against extremist groups.

Turkish Foreign Minister Mevlut Cavusoglu said the US strike should be the start of a renewed effort to end the civil war, which has killed an estimated 400,000 people and displaced half of Syria's population.

"If this intervention is limited only to an air base, if it does not continue and if we don't remove the regime from heading Syria, then this would remain a cosmetic intervention," he said.

He said the best outcome would be a peace agreement that leads to a transitional government accepted by all Syrians, followed by elections in which all Syrians, including those living abroad, could vote for new leadership. For that to happen, he said, "this oppressive Assad needs to go."

Iran, which has provided crucial military and political support to Assad, meanwhile called for a fact-finding mission to determine what caused the chemical attack in Khan Sheikhoun.

State television quoted Iranian President Hassan Rouhani as saying the committee should be impartial and "must not be headed by Americans."

Rouhani said "neutral countries should come and assess to make it clear where the chemical weapons came from."

Syria's government has denied carrying out any chemical attack, and Russia's Defense Ministry said the toxic agents were released when a Syrian airstrike hit a rebel chemical weapons arsenal and munitions factory.

British Foreign Secretary Boris Johnson cancelled a planned trip to Russia because of fast-moving events in Syria. Johnson said the situation in Syria has changed "fundamentally" following the chemical attack and the US response.

Johnson condemned Russia's continued defence of Assad "even after the chemical weapons attack on innocent civilians."

He had planned to travel to Russia Monday on a trip intended to start a fresh dialogue with Moscow.

US Secretary of State Rex Tillerson meanwhile plans to meet with G-7 foreign ministers in Europe next week before going on to Moscow. Johnson said Tillerson will be able to give a "clear and coordinated message to the Russians."

In Damascus, dozens of Syrian students gathered outside the offices of the United Nations to protest the US missile attack, chanting "Death to America" and "Death to Israel."

University student Ashraf Fadel said he came to denounce "the unjust American aggression against Syria." He added that the United Nations was "created to support America instead of serving the wronged people."

In a separate development, activists opposed to the Islamic State group said a US-led coalition air strike hit a boat carrying civilians fleeing across the Euphrates River. The groups Raqqa is Being Slaughtered Silently and Sound and Picture said the attack killed a woman and her six children.

The attack occurred in the Shuaib al-Zeker area, near where US-backed Syrian fighters have been battling IS under the cover of coalition air strikes.

Activists and state media said a separate air strike by the US-led coalition on the northern IS-held village of Hneida killed at least 14 civilians, including children. The Observatory said 15 people, including four children, were killed in the air strike. The Sound and Picture group said the air strike hit an internet cafe, killing 14 people.

In Saudi Arabia, the official Saudi Press Agency reported that US President Donald Trump has spoken by telephone with King Salman about the US missile strike on Syria.

The news agency reported that during the Friday phone call, the Saudi monarch congratulated Trump for his "courageous decision."

Saudi Arabia said the missile launch was the right response to "the crimes of this regime to its people in light of the failure of the international community to stop it."

The kingdom is among the most vehement opponents of Assad and supports Sunni rebel groups fighting to oust him. The Sunni rulers of Saudi Arabia are in a power struggle for regional dominance with Iran's Shiite government.