Iran doctor freed in swap for US Navy veteran

Taerri, a dermatologist, had been charged with attempting to export a filter to Iran that he said was for vaccine research 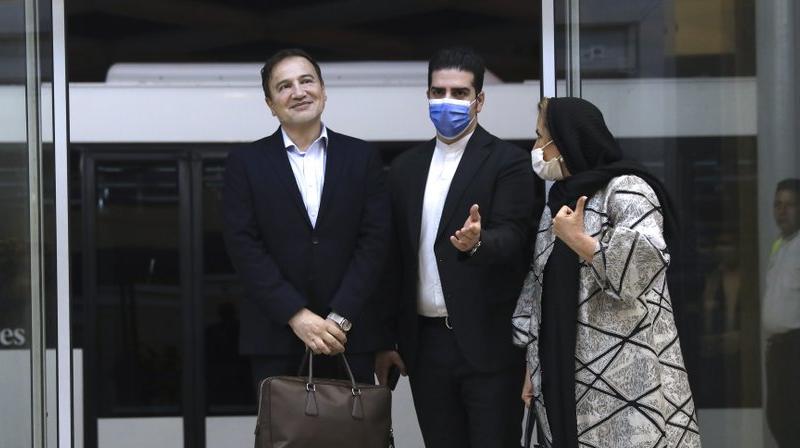 Matteo Taerri, left, is welcomed by an Iranian Foreign Ministry official as his wife stands at right, upon arrival at Tehran's Imam Khomeini Airport from the U.S. (AP)

Tehran: An Iranian doctor based in Florida returned to his homeland Monday after being part of a swap that saw a U.S. Navy veteran held by Iran return to America.

The semiofficial Fars news agency published an image of Matteo Taerri being greeted at Tehran’s Imam Khomeini International Airport by Foreign Ministry officials and his family. The agency and state television identified Taerri by his Persian name, Majid.

Taerri, a dermatologist, had been charged with attempting to export a filter to Iran that he said was for vaccine research but that U.S. authorities said required a license because it could be used for chemical and biological warfare purposes. He was also accused of structuring a series of bank deposits below $10,000 to evade reporting requirements under federal law.

He pleaded guilty late last year and has already served months behind bars. But in April, he was permitted to be free on bond after the Justice Department withdrew its request to have him detained, citing what it said were significant foreign policy interests.

Fars quoted Taerri as calling his charges “futile and unfair.” Taerri reportedly said he tried to send the filter to Iran to help scientists at Tehran University manufacture a cancer vaccine, without elaborating.

Iran allowed Michael White, of Imperial Beach, California, to leave the country Thursday. He was detained in July 2018 while visiting a girlfriend in Iran. He was convicted of insulting Iran’s supreme leader and posting private information online.

White was released from prison in March on a medical furlough that required him to remain in the country in the care of the Swiss Embassy in Tehran, which represents America’s interests in Iran.

Earlier last week, an Iranian scientist named Sirous Asgari returned to Tehran after being acquitted in a federal trade secrets case and deported. Asgari’s departure had been delayed by the coronavirus pandemic, and his supporters say the scientist contracted the virus while being held.

The White-Taerri swap comes after months of quiet diplomacy, even as the U.S. under President Donald Trump continues a maximum-pressure campaign targeting Iran after unilaterally withdrawing from Tehran’s nuclear deal with world powers in May 2018.

The two countries had been locked in a series of escalating incidents, including the U.S. drone strike killing an Iranian general in Baghdad and an Iranian ballistic missile attack targeting American troops in Iraq.

Other Westerns and Iranians with ties abroad have been detained by authorities in the country, likely to be used as bargaining chips in negotiations. Deputy Foreign Minister Hossein Jaberi Ansari, on hand for the airport ceremony, said Iran had “mobilized” its potential to release other Iranians in the U.S., without elaborating.