Johnny, a Dubai resident, had gone to visit his friend in Oman during the Eid break. 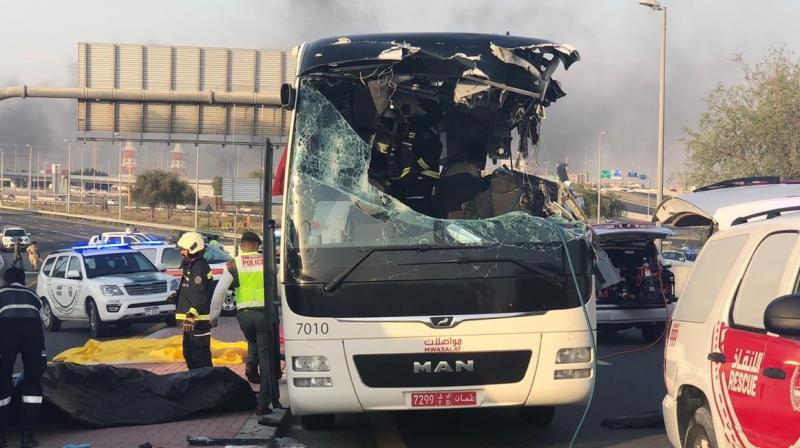 It had wrongly entered a road not designated for buses towards Al Rashidiya metro station here. (Photo: Twitter)

Dubai: The survivors of the Dubai road accident that killed 17 people, including 12 Indians, said the co-passengers screamed and wailed as they tried to help each other in the blood-splattered bus that rammed into a low-clearance sign here.

The bus, coming from Oman's capital Muscat to Dubai, was carrying 31 passengers when it crashed into a height barrier that cut the left side of the bus and killed passengers sitting on that side on Thursday evening. It had wrongly entered a road not designated for buses towards Al Rashidiya metro station here.

Nidhin Laji, 29, who belongs to Kerala, survived the accident with a minor scratch on his face.

"There was blood everywhere. Most people who were sitting on the left side died on the spot," Laji, who was sitting on the right side of the vehicle, was quoted as saying by the Khaleej Times.

Recounting the horror of the accident, he said that he heard screams and gasps for breath.

"Blood and flesh were all over the seats as the metal plate scythed through the vehicle," he said, adding that he was planning to get down at the metro station when he heard people screaming.

Laji slipped through one of the doors as ambulances and police vehicles reached the spot.

Explaining further, he said there were two drivers on the bus and they were taking turns to drive. After the accident, all survivors tried to help those in pain.

Zidan Firoz, who was travelling with his parents, was watching the skyline when the accident happened. The Oman residents were to spend the rest of the Eid holidays in Dubai, the Gulf News reported.

Firoz's parents could not survive the tragedy. His father died on the spot. Still shaken by the terrible jolt, he felt his heavily injured mother, Reshma, still breathing and tried to pull her out of the wreckage. She too succumbed to her injuries.

For Manisha, who lost her husband Vikram Thakur and cousin Roshni in the accident, it was a narrow escape as she had to cancel her travel due to pending office work, the Khaleej Times reported.

"I still cannot believe it. I spoke to my husband in the afternoon and he said he was on his way back. I had no idea about the accident until Roshni's brother called me. I then called the police and was told my husband was no more. I rushed to the police station only to find out that even my cousin was dead. I am devastated," she said.

After paperwork, Manisha was taken to the Dubai Forensics department where she identified the bodies of her husband and cousin, who died on the spot of the accident.

Her Lebanese neighbour was too at the police station to support her.

"I heard Manisha howling in the apartment and when I checked on her, she told me about the tragic news. I immediately got her with me to the police station," he said.

In another corner of the police station, a grief-stricken Anoop waited patiently to get the paperwork done for his colleague Kiran Johnny, a 26-year-old mechanical engineer, who also died in the accident.

"He had just started his first job in the UAE about six-eight months back. His parents are in Thrissur, Kerala, and he also has an elder brother in Dubai. His brother is not in the right state of mind to do the repatriation formalities which is why I am here," he said.

Johnny, a Dubai resident, had gone to visit his friend in Oman during the Eid break.

Deepa Kumar's family is yet to break the news of his death to his wife, who survived along with the couple's four-year-old daughter with minor injuries.

We are waiting for the formalities to be completed to repatriate his mortal remains. Once that is done, we will have to break the news to them and fly them back home, said one of the relatives.

The Dubai Police and Mwasalat, the transport company to which the bus belonged, said in their respective statements that a total of 15 people died on the spot, and 16 were rushed to the hospital. Two more died later, raising the total death toll to 17.

Six passengers received treatment for injuries, with one being critically injured. Eight passengers were treated and discharged, the report said.

Police officials also revealed that the bus was driving over the speed limit of 40kmph. The left-hand side of the bus roof was completely destroyed in impact, and passengers seated in the right-hand side escaped relatively unhurt. The bus driver, an Omani national, has sustained serious injuries and is presently hospitalised.

"Sometimes a minor error or negligence during driving leads to serious consequences," he said.