When Syria’s conflict began with anti-government demonstrations in March 2011, Kurdish leaders largely kept out of the nascent uprising. 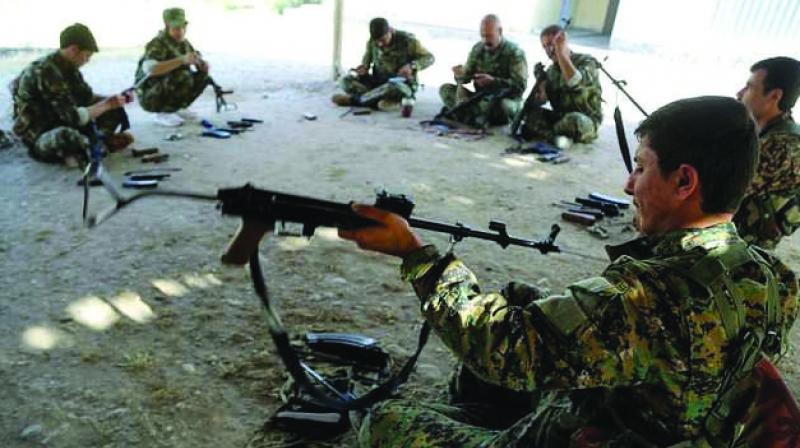 Syria’s Kurds are now receiving direct US military support, and hold large swathes of the Kurdish-majority parts of the country they call ‘Rojava’. (Photo: AFP)

Beirut: Syria’s Kurds were once a marginalised minority, but now they are leading the charge for the Islamic State group’s Raqqa bastion and hoping to cement their gains in the war.

The surprise turnaround in their fortunes is the result of several factors, including the Syrian regime’s decision to focus attention elsewhere and a key alliance with Washington against ISIS.

They are now receiving direct US military support, and hold large swathes of the Kurdish-majority parts of Syria they call “Rojava”.

But Kurdish gains remain vulnerable, experts say, because their alliance with Washington could prove fragile and they face the wrath of neighbouring Turkey.

The Kurds are an ethnic group with their own language scattered across Turkey, Iraq, Iran and Syria, where they made up around 15 per cent of the pre-war population.

When Syria’s conflict began with anti-government demonstrations in March 2011, Kurdish leaders largely kept out of the nascent uprising.

That angered the Opposition, but contributed to a Syrian government decision in mid-2012 to withdraw most of its forces from Kurdish-majority regions and focus attention elsewhere.

The Kurds began building semi-autonomous institutions in three “cantons” in north and northeast Syria, and revived their long-suppressed culture.

Their leadership’s “decision to calibrate its political ambitions more locally, below the threshold of regime change” and its “non-adversarial modus vivendi” with the regime set the stage for its growing power, said Sam Heller, a Syria expert at the Century Foundation think tank.

“The Kurds are betting that the capture of Raqqa will give them long-lasting international support to build Rojava,” added Fabrice Balanche, a Syria expert at the Washington Institute think tank.

The YPG initially focused on local security and preventing Kurdish areas from being drawn into the conflict between rebels and the government.

But that role shifted with the emergence of ISIS, which in 2014 declared a “caliphate” in territory it had seized in Syria and Iraq.

With its “competent, unitary command” and “generally reliable hostility to jihadists”, the YPG established itself as the ground force of choice for the US-led coalition fighting ISIS in Syria, Heller said.

Together they won a series of hard-fought battles against ISIS, including the key recapture of the flashpoint town of Kobane in early 2015.

Syria’s government has held off criticising the Kurds, but the YPG’s rising profile has not been universally welcomed.

Some among Syria’s Opposition have never forgiven the Kurds for failing to back the uprising, and their expansion into Arab-dominated areas in northern Syria has stoked existing ethnic tensions.

Neighbouring Turkey, meanwhile, has been infuriated by the growing power of the Kurds in northern Syria.

It calls the YPG an affiliate of the Kurdistan Workers’ Party (PKK), which Turkey deems a “terrorist group”, and in August 2016 launched an operation inside northern Syria against ISIS and Kurdish fighters.

In October 2015, the Syrian Democratic Forces was formed, an alliance of Kurdish forces and Arab fighters created to tamp down tensions over the YPG’s rising power.

But the alliance “remains squarely under YPG command and wholly reliant upon the PKK-trained Kurdish fighters who form its backbone”, according to the International Crisis Group (ICG) think tank.

With the SDF’s creation, Washington stepped up military support, though it said it was channelling equipment to the Arab component of the alliance.

And in November 2016, the alliance announced an operation to recapture Raqqa city, ISIS’ most important remaining Syrian bastion.

Ankara remains fiercely hostile to the SDF, and had hoped to convince US President Donald Trump’s administration to find an alternative force to capture Raqqa, an Arab-majority city and major symbolic prize.

But on May 9, Washington instead announced that it would begin directly arming the YPG, provoking Turkish fury.

And on Tuesday the SDF said it launched a final assault on Raqqa and that its fighters had entered the city.

Experts say there are significant threats to the gains made by Syrian Kurds, chief among them conflict with Turkey.

“For now, the US role in supporting the YPG provides some degree of protection,” said Noah Bonsey, a senior ICG analyst.

“But we can’t assume it’s permanent, it may not even last much longer than the immediate campaign,” he told AFP.

Other challenges include the possibility that the Syrian government will seek to reestablish control over Kurdish-majority areas, and tensions within Kurdish-held territory over the PYD’s political dominance.

The Kurdish leadership is “going to have to show a capacity for some real strategic compromises, in which it would be giving up some of its ambitions to protect much of what it’s already accomplished,” said Bonsey.

“If it’s able to make compromises with external actors as well as do more to address internal pressures... I think it can protect much of what’s achieved.”