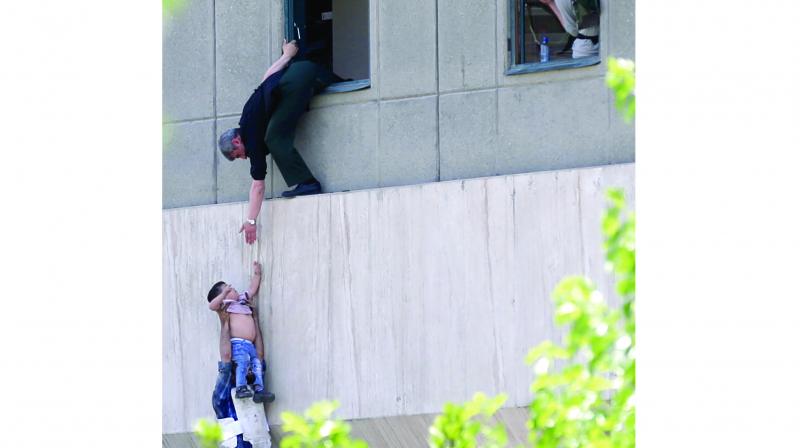 Iranian policemen evacuate a child from the Parliament building in Tehran on Wednesday, during an attack on the complex. (Photo: AFP)

Tehran: Suicide bombers and gunmen attacked the Iranian Parliament and the mausoleum of Ayatollah Khomeini in Tehran on Wednesday, killing at least 12 people and injuring 43 in a twin assault which Iran’s Revolutionary Guards blamed on regional rival Saudi Arabia.

ISIS released a video of the attackers from inside the building via its Amaq propaganda agency — a rare claim of responsibility while an attack was still going on.

The attacks on two of Iran’s most potent symbols lasted around five hours before all the gunmen holed up in parliamentary office buildings were killed. Iranian police has arrested five suspects and the country's supreme leader, Ayatollah Ali Khamenei, struck a defiant tone.

The deputy head of Iran’s Revolutionary Guards promised retaliation on ISIS and its allies. “Let there be no doubt that we will take revenge for today’s attacks in Tehran, on terrorists, their affiliates and their supporters,” Brigadier General

“This terrorist attack happened only a week after the meeting between the US President (Donald Trump) and the (Saudi) backward leaders who support terrorists. The fact that Islamic State has claimed responsibility proves that they were involved in the brutal attack,” said the statement, published by Iranian media.

The assaults — coming in the middle of the Islamic holy month of Ramadan — appeared calculated for maximum shock. They began mid-morning when four gunmen burst into the Parliament complex in the centre of Tehran, killing a security guard and one other person.

An interior ministry official said they were dressed as women and entered through the visitors’ entrance. One eventually exploded a suicide vest while the others were killed by security forces.

At roughly the same time, two assailants entered the grounds of the Khomeini mausoleum, killing a gardener and wounding several other people. One detonated a suicide vest, while the other was shot dead.

It was not clear whether the shrine attackers were women, as earlier reported, or just wearing female clothing.