UAE is home to a 3.3-million-strong Indian community, who make up around 30 percent of the Gulf state's population 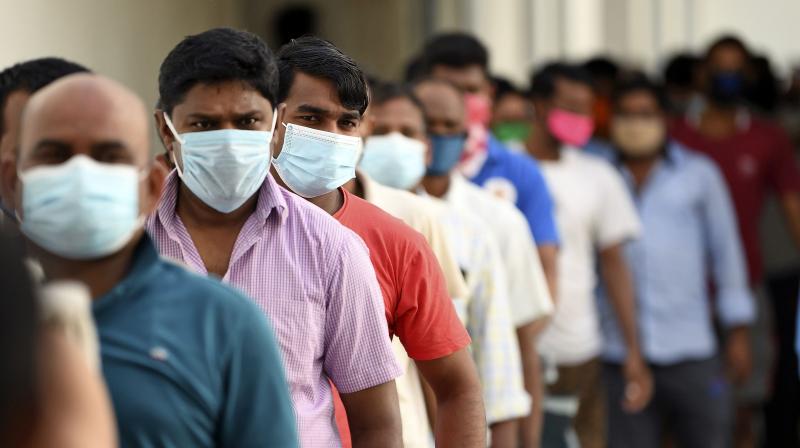 Foreign workers wearing protective masks keep distance from each other as they queue in Dubai. (AFP)

Dubai: Indians in the UAE have voiced scepticism about a "massive" operation announced by New Delhi to bring home some of the hundreds of thousands of nationals stranded by coronavirus restrictions.

"It is just propaganda," said Ishan, an Indian expatriate in Dubai, one of seven emirates in the UAE and long a magnet for foreign workers.

He was reacting to his government's announcement this week that it would deploy passenger jets and naval ships to bring home citizens stuck in a host of countries.

India's consulate in Dubai said it received about 200,000 requests from nationals seeking repatriation -- mostly workers who have lost their jobs in the pandemic.

One vessel was heading to the UAE, India's government said, while two flights were scheduled to depart the UAE for India on Thursday.

But the plans drew scorn from Ishan, who was a manager at a luxury services company before he was made redundant last month.

"It's like throwing a dog a bone," the 35-year-old complained on Wednesday, dismissing the Indian government's efforts as a drop in the ocean.

India banned all incoming commercial flights in late March as it imposed one of the world's strictest lockdowns to tackle the spread of coronavirus.

The UAE is home to a 3.3-million-strong Indian community, who make up around 30 percent of the Gulf state's population.

To the anger of some Indian expatriates, the evacuees will have to pay for their passage home and spend two weeks in quarantine on arrival.

"We are upset over the failure of our government," Ishan said. "What about the people with no money? How are you helping them?"

The Indian consulate could not be reached for comment.

Ibrahim Khalil, head of the Kerala Muslim Cultural Center in Dubai, said the consulate had asked him to select 100 Indian nationals for repatriation.

"We are planning to pay for the tickets of those who cannot afford it," he said, adding that the elderly, pregnant and those suffering from illnesses were a priority.

But one Indian woman, eight months pregnant in the neighbouring emirate of Sharjah, was not one of the lucky ones chosen to go back home in one of Thursday's planned departures.

"We called them but nobody would pick up," the 26-year-old, who requested anonymity, told AFP.

She arrived in the UAE a few months ago to visit her husband, who lives in a shared apartment with another family to save money.

"We have no insurance here and the medical expenses are too costly," said the woman, who was anxious to leave to give birth at home.

"I just hope that I am chosen to go back to India. I don't know why I haven't been considered."