The recent march was the second in what Gaza's Hamas rulers said would be several weeks of protests against a decade-old border blockade. 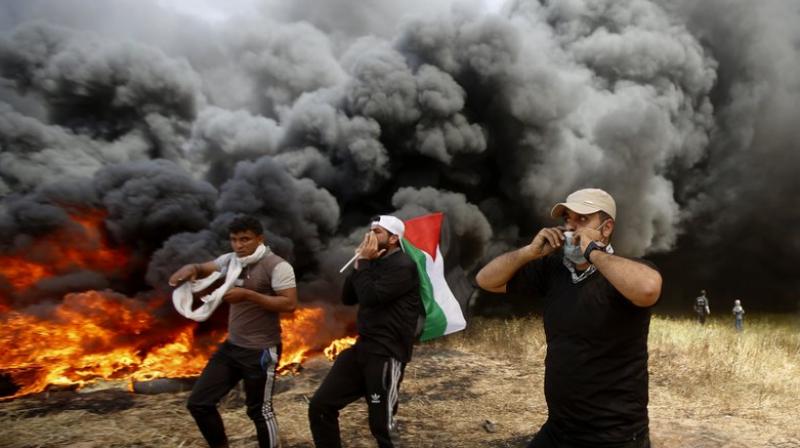 Khuzaa: Israeli troops killed nine men on Friday in the second mass protest in as many weeks along Gaza's volatile border, as Palestinians torched piles of tires to create a smoke screen to block the view of snipers.

Friday’s deaths brought to 29 the number of Palestinians killed by Israeli fire over the past week, including 23 protesters.

Gaza’s Health Ministry said 1,070 people were wounded on Friday, including 293 by live fire. It said 25 of those wounded were in serious condition. Among those hurt were 12 women and 48 minors, the ministry added.

Friday's march was the second in what Gaza's Hamas rulers said would be several weeks of protests against a decade-old border blockade of the territory.

Israel has accused the Islamic militant group of using the protests as a cover for attacking Israel's border and has warned that those approaching the fence put their lives at risk.

On Friday, thousands of Palestinians streamed to five tent encampments that organisers had set up, each about several hundred meters from the border fence.

In one camp near the border community of Khuzaa, smaller groups of activists moved closer to the fence after Friday's noon prayers. Associated Press video showed demonstrators torching large piles of tires, engulfing the area in black smoke meant to shield them from Israeli snipers; the faces of some of the activists were covered in black soot.

Israeli troops on the other side of the fence responded with live fire, tear gas, rubber-coated steel pellets and water cannons.

Later, the shadowy Hamas leader in Gaza, Yehiyeh Sinwar, visited the Khuzaa camp, receiving a hero's welcome. He was surrounded by hundreds of supporters who chanted, "We are going to Jerusalem, millions of martyrs."

Sinwar told the crowd that the world should "wait for our great move when we breach the borders and pray at Al-Aqsa," referring to the major Muslim shrine in Jerusalem. Israel has said it would prevent a mass border breach at any cost.