Muntazer al-Zaidi shot to prominence in Dec 2008 when he flung his shoe at Bush who was holding press conference in Baghdad. 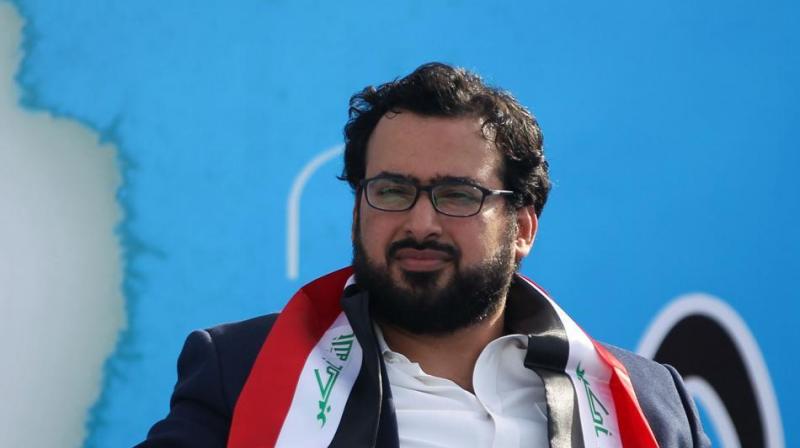 Muntazer al-Zaidi, an Iraqi journalist famous for throwing a shoe at former US president George W. Bush in 2008, attends a rally in Baghdad on May 4, 2018 for the "Marching Towards Reform" alliance between Shiite leader Moqtada al-Sadr and the communist party, ahead of the May 12 parliamentary elections. (Photo: AFP)

Baghdad: The Iraqi journalist who grabbed headlines around the world by hurling his shoes at then US president George W. Bush is pitching for a seat in parliament at upcoming elections.

“My ambition is to throw all the thieving politicians in prison, make them regret what they have done and confiscate their wealth,” Muntazer al-Zaidi, 39, told AFP ahead of the May 12 vote in his conflict-scarred homeland.

Zaidi shot to prominence in December 2008 when he leapt up at a farewell press conference Bush was holding in Baghdad and flung his shoes at the US leader.

While he narrowly missed hitting the man responsible for launching the invasion of Iraq, Zaidi was later jailed for assaulting a head of state and ended up serving nine months behind bars.

After his release Zaidi sought refuge in Lebanon, where he settled and had a daughter.

The protest against Bush saw him hailed as a hero by many around the Arab world, and he remains unrepentant as he pushes for office.

“I don’t regret what I did, on the contrary, I just regret that at that moment I didn’t have another pair of shoes,” said Zaidi, who is running for an alliance between Shiite cleric Moqtada Sadr and communists.

Placed low down on the Marching Towards Reform list in Baghdad, it appears Zaidi has little chance of actually getting elected -- but he remains defiant.

“It would not be an honour to have thieves as colleagues, and my objective is to take back money that has been stolen,” he said, when asked if he feared becoming like other politicians reviled for graft.

Zaidi explained that he chose to represent Marching Towards Reform as he said it is independent and looking to shatter the country’s sectarian divide.

As for his view on US involvement in Iraq -- a decade after he took aim at Bush, he remains deeply opposed and wants Washington’s troops out of the country.

He rejects the idea that the US military presence has helped Iraqi forces battle back the Islamic State group.

“The US favoured IS, how can you say that they want to get rid of them?” he asked.