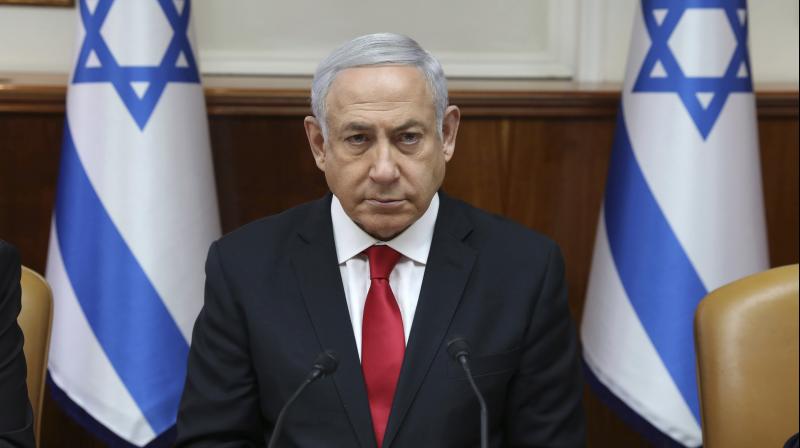 Jerusalem: Israeli Prime Minister Benjamin Netanyahu said Sunday he had ordered the military to launch further strikes on Gaza Strip terrorists in response to rocket fire from the territory, as an escalation entered its second day.

"I instructed the (military) this morning to continue its massive strikes on terror elements in the Gaza Strip and ordered (it) to reinforce the troops around the Gaza Strip with tanks, artillery and infantry forces," Netanyahu said at the start of a cabinet meeting.

Israel said around 450 rockets or mortars had been fired from the Palestinian enclave run by Hamas since Saturday, and it responded with waves of air and tank strikes.

But Israel disputed their account of the deaths of a pregnant mother and her baby, blaming errant Hamas fire.

One 58-year-old Israeli man was killed overnight by a rocket strike on the city of Ashkelon near the Gaza border, Israeli police and the hospital said.

Netanyahu is currently engaged in tough negotiations to form a new government following his victory in April 9 elections.

A ceasefire brokered by UN and Egyptian officials between Israel and Hamas had led to calm surrounding the elections.

But the past week saw a gradual uptick in violence as Hamas seeks further concessions from Israel.

Israel and Palestinian terrorists in Gaza have fought three wars since 2008.