At least 28 dead in raid on Tripoli military school: ministry

The military school is in al-Hadba al-Khadra, a residential sector of the Libyan capital. 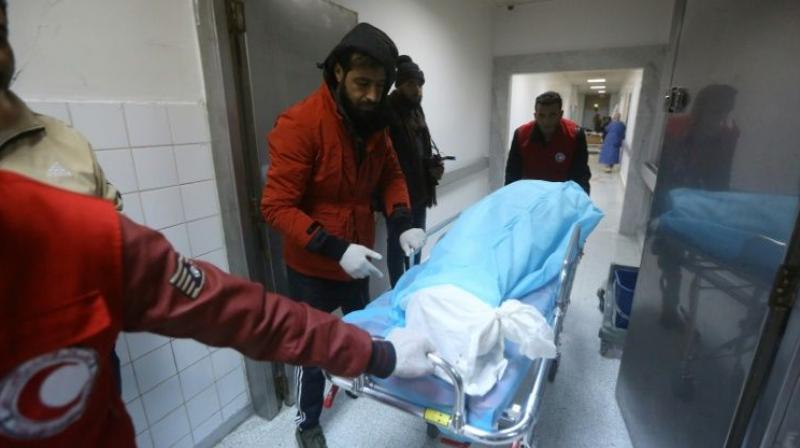 The GNA health ministry called for blood donors to go to hospitals and blood banks to help those injured. (Photo: AFP)

Tripoli: At least 28 people were killed and dozens injured on Saturday in an air strike on a military school in the Libyan capital Tripoli, a ministry spokesman said.

"An air raid on the military school of Tripoli killed 28 cadets and injured dozens more," Amin al-Hashemi, spokesman for the health ministry of the Government of National Accord (GNA) said.

At the time of the strike the cadets were gathered on a parade ground before going to their dormitories, he added.

The military school is in al-Hadba al-Khadra, a residential sector of the Libyan capital.

The GNA health ministry called for blood donors to go to hospitals and blood banks to help those injured.

The southern part of Tripoli has seen fierce fighting since last April, when military strongman Khalifa Haftar began an offensive against the GNA.

Libya was plunged into chaos with the toppling and killing of longtime dictator Moamer Kadhafi in a 2011 NATO-backed uprising. It has since become divided between the GNA and rival authorities based in the country's east.

GNA forces accused those loyal to Haftar of the strike, posting photos of the victims and the wounded on Facebook.

However, pro-Haftar forces have not claimed responsibility for the attack.

More than 280 civilians and more than 2,000 fighters have been killed since the start of Haftar's assault on Tripoli, according to the United Nations. The fighting has also displaced some 146,000 people.

The UN Security Council last month renewed its calls for a ceasefire in Libya, and urged foreign actors to honour an arms embargo on the country -- which Jordan, Turkey and the United Arab Emirates have regularly violated, according to a confidential UN report seen by AFP.