The Emirates, home to Abu Dhabi and Dubai, had issued warnings to residents that the storm was coming 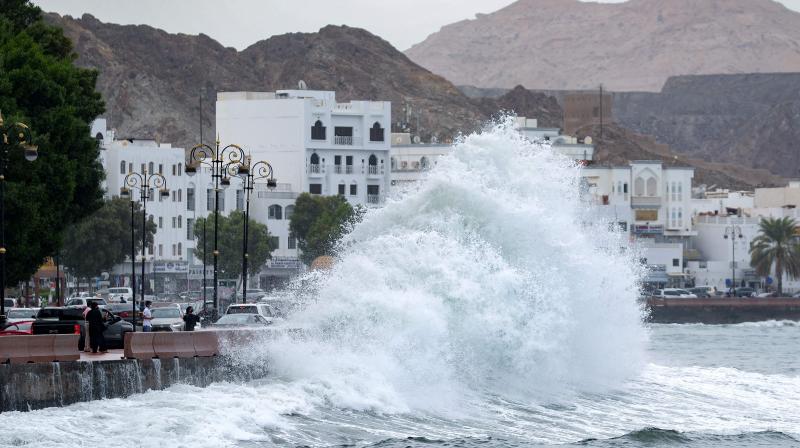 High waves break on the Mutrah sea side promenade in the Omani capital Muscat on October 2, 2021, as the Shaheen tropical storm hits the country. (AFP)

Dubai: The death toll from Cyclone Shaheen rose to five Monday while other fishermen from Iran remained missing as the storm moved further inland into Oman and weakened.

Authorities in Oman said they found the body of a man who disappeared when floodwaters swept him away from his vehicle. On Sunday as the storm made landfall, they said a child similarly drowned and two foreigners from Asia died in a landslide.

In Iran, state television said rescuers found the body of one of five fishermen who went missing off Pasabandar, a fishing village near the Islamic Republic's border with Pakistan. Earlier on Sunday, Iranian deputy parliament speaker Ali Nikzad said he feared as many as six fishermen had been killed because of the cyclone.

India's Meteorological Department, the top forecasters for cyclones that sweep across the Indian Ocean, said winds from Shaheen now gust up to 90 kph (55 mph) and would continue to weaken. It predicted the storm would weaken into a tropical depression in the coming hours. Shaheen made landfall with winds reaching up to 150 kph (93 mph).

Omani state television broadcast images of flooded roadways and valleys as the storm churned deeper into the sultanate, its outer edges reaching the neighboring United Arab Emirates. The Emirates, home to Abu Dhabi and Dubai, had issued warnings to residents that the storm was coming. Winds had picked up in the country from Sunday, sweeping across the grounds of Dubai's newly opened Expo 2020.

A cyclone is the same as a hurricane or a typhoon; their names only change because of their location. Hurricanes are spawned east of the international date line. Typhoons develop west of the line. They are known as cyclones in the Indian Ocean and Australia.