Taliban rally outside Kabul as they consolidate rule 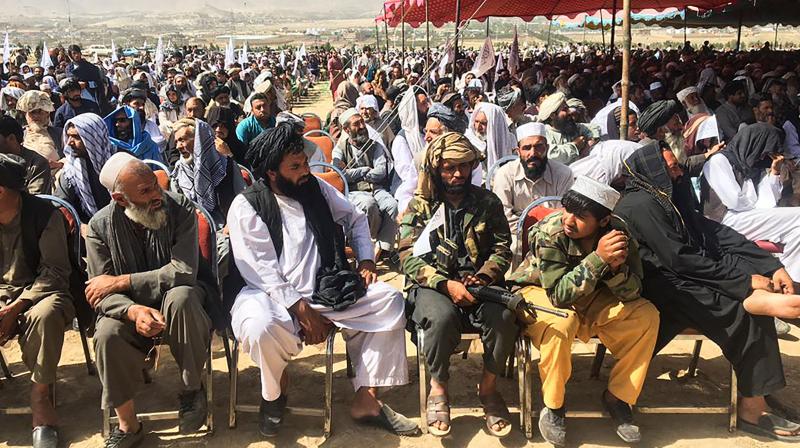 KOHDAMAN: Around 1,000 Taliban supporters attended a rally on Sunday in a vast field to the north of Kabul, in a show of strength as they consolidate their rule of Afghanistan.

The crowd, made up only of men and boys, listened to speeches by leading Taliban officials and commanders at Kohdaman township in the hilly outskirts of the capital.

The rally was the first of its kind in the capital since the Islamist group seized control of the country seven weeks ago following a lightning offensive.

Flanked by white and black Taliban standards and fighters in full combat gear carrying assault rifles, the speakers addressed an audience sat in rows of chairs under awnings.

To kick off proceedings, a procession of fighters carrying flags and weapons -- including rocket launchers -- paraded around the crowd.

Some of the mainly unarmed supporters waved homemade posters, while others sported red or white Taliban headbands.

Tribal elders watched on cross-legged from the side of the stage.

"America is defeated, impossible, impossible -- but possible!" one song said.

Some chanted pro-Taliban slogans as they were driven down the dusty road on pick-up trucks to the site, as others shouted "Allahu Akbar" (God is greatest) when they walked into the shaded area in front of the stage.

At the turn-off towards the township, about 10 armed fighters lined the road beneath a large banner honouring a deceased Taliban commander and professing the "support of the people of Kohdaman for the Islamic Emirate of Afghanistan in the action of liberating the country".

Last Thursday, the Taliban had violently cracked down on a small women's rights demonstration in eastern Kabul, firing shots into the air to disperse protesters.

Then, gunmen pushed back the women protesters as they tried to continue with the demonstration, while a foreign journalist was hit with a rifle and blocked from filming.

A Taliban fighter released a brief burst of gunfire into the air with his automatic weapon, AFP journalists saw.

Isolated anti-Taliban rallies -- with women at the forefront -- were staged in cities around the country after the group seized power, including in the western city of Herat where two people were shot dead.

But protests have dwindled since the government issued an order banning demonstrations that did not have prior authorisation, warning of "severe legal action" for violators.

The handful that have gone ahead have been criticised as carefully orchestrated publicity stunts, including a rally at a Kabul university where hundreds of fully veiled women professed support for the new regime.