Verdict due this week in assassination of Lebanon ex-PM Hariri

The judgment harks back to an event that changed the face of Middle East, leading to protests that pushed Syrian forces out of Lebanon 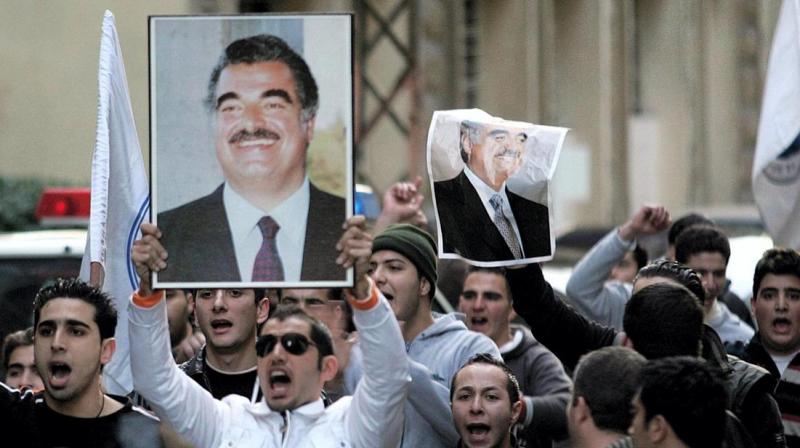 Four alleged members of the Shiite Muslim fundamentalist group Hezbollah are on trial over the huge Beirut suicide bombing that killed Sunni billionaire Hariri and 21 other people. (AFP)

The Hague: A UN-backed tribunal will give its verdict Friday on the 2005 murder of former Lebanese premier Rafic Hariri, but questions will remain over a long and costly trial whose suspects remain at large.

Four alleged members of the Shiite Muslim fundamentalist group Hezbollah are on trial in absentia at the court in the Netherlands over the huge Beirut suicide bombing that killed Sunni billionaire Hariri and 21 other people.

The judgment harks back to an event that changed the face of the Middle East, with Hariri's assassination triggering a wave of demonstrations that pushed Syrian forces out of Lebanon after 30 years.

The court is billed as the world's first international tribunal set up to probe terrorist crimes, and it has cost at least $600 million since it opened its doors in 2009 following a UN Security Council resolution.

But the tribunal faces doubts over its credibility with Hezbollah chief Hassan Nasrallah refusing to hand over the defendants, and the case relying almost entirely on mobile phone records.

And while Hariri's son Saad looked forward to a "day of truth and justice", many Lebanese people are meanwhile more preoccupied with the country's economic crisis, the worst since the 1975-1990 civil war.

Due to the coronavirus pandemic, the judgment "will be delivered from the courtroom with partial virtual participation" at 0900 GMT on Friday.

The four defendants went on trial in 2014 on charges including the "intentional homicide" of Hariri and 21 others, attempted homicide of 226 people wounded in the bombing, and conspiracy to commit a terrorist act.

Salim Ayyash, 56, is accused of leading the team that carried out the bombing, which involved a truck packed full of explosives that detonated near Hariri's motorcade on February 14, 2005.

Assad Sabra, 43, and Hussein Oneissi, 46, allegedly sent a fake video to the Al-Jazeera news channel claiming responsibility on behalf of a made-up group.

Hassan Habib Merhi, 54, is accused of general involvement in the plot.

The alleged mastermind of the bombing, Hezbollah commander Mustafa Badreddine, was indicted by the court but is believed to have died while fighting with the Syrian regime in May 2016.

The surviving suspects face life imprisonment if convicted, although sentencing will be carried out at a later date.

"If a convicted person is at liberty and not present the trial chamber shall issue a warrant of arrest," a court spokesman said.

Both the prosecution and defence can appeal the judgment and sentence, while if a defendant is eventually arrested he can request a retrial.

Prosecutors said during the trial that Hariri was assassinated because he was perceived to be a "severe threat" to Syrian control of the country.

Hariri was Lebanon's Sunni premier until his resignation in 2004 over Syria's role as power-broker in the country.

The case was "circumstantial" but "compelling", prosecutors said, resting on mobile phone records allegedly showing the suspects conducting intense surveillance of Hariri from just after his resignation until minutes before the blast.

Saad Hariri, who later went on to become prime minister like his father, said in a statement issued by his office last week that he had "never lost hope in international justice and the exposure of the truth".

"We in the Future Movement look to the seventh of August, to be a day of truth and justice for Lebanon," he said.

He called on supporters to demonstrate "patience" and avoid social media disputes about the verdict.

Lebanese Prime Minister Hassan Diab meanwhile called on people to avoid "fishing in troubled waters" and said authorities "must be ready to deal with the fallout" of the judgment.

The verdict will not be the end of the tribunal's work, as it opened a second case last year charging prime suspect Ayyash with terrorism and murder over deadly attacks on politicians in 2004 and 2005.