Before the war erupted in 2011, Syria produced enough wheat to feed its entire population but harvests then plunged to record lows 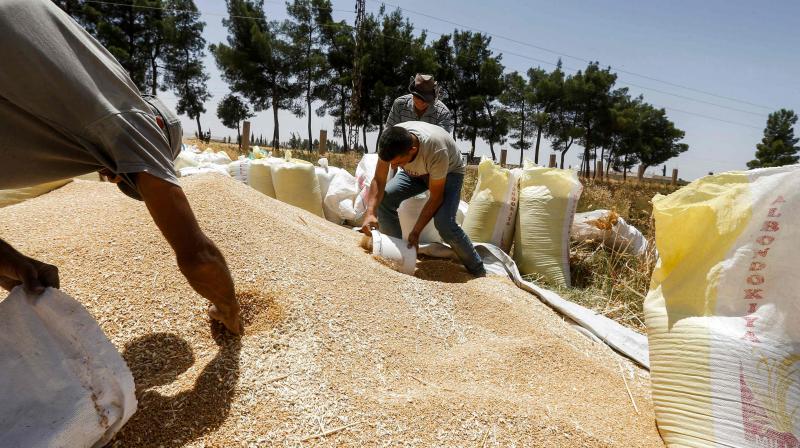 A farmer collects wheat kernels into a bucket before being poured into sacks during the harvest season, in a field in the countryside of al-Kaswa, south of Syria's capital Damascus. (AFP)

Damascus: Watching a combine harvester grind through his golden wheat, farmer Yahya Mahmoud is relieved the yield looks good this year, even as a tanking economy leaves millions hungry across war-torn Syria.

Before the war erupted in 2011, Syria produced enough wheat to feed its entire population but harvests then plunged to record lows, boosting reliance on imports, mainly from regime ally Russia.

Heavy rains and reduced violence in parts of the country this year have led to a much improved harvest, one that farmers and officials hope will soften the blow of an economic crunch that has plunged millions into food insecurity.

In the Al-Kaswa region near the capital Damascus, Mahmoud eyed yellow wheat stalks, their ribbed tips shining under the strong June sun.

"I rushed to harvest my wheat crop this year... to feed myself and my family," said the 61-year-old farmer, fearing crop fires as summer temperatures soar.

"Those who grow wheat don't go hungry," he added, a brown hat covering his head.

More than nine years into a conflict that has killed over 380,000 people and displaced nearly half of the country's pre-war population, a staggering 9.3 million Syrians face food insecurity, the United Nations says.

The value of the Syrian pound has reached unprecedented lows against the dollar on the black market, sending prices soaring in a country where the UN says nine out of 10 people now live in poverty.

The crisis has been compounded by a COVID-19 outbreak and new US sanctions against Syria.

In a bid to ease the crisis, many are looking towards the agriculture sector, which the UN says forms the largest part of the Syrian economy and contributes to the livelihoods of millions in rural areas.

Farmers across the country this year were able to use 70 percent of the land allocated for cereal production, according to the UN's Food and Agriculture Organization.

Mahmoud cultivated four hectares (almost 10 acres) of land with wheat instead of one in previous years, he told AFP.

"It was a blessed year, with plentiful rain, so we had to make use of it," said the farmer, who returned to his plot two years ago after the government recaptured areas around Damascus from rebels.

Inspecting fields nearby, Hisham al-Sayyad, a local agricultural official, said farmers in Al-Kaswa have cultivated 3,000 hectares of land this year, which is 1,000 more than the year before.

"Despite sanctions and an economic siege, agriculture can help us achieve self-sufficiency."

Bigger harvests alone do not guarantee better lives for Syrians, however.

Price hikes fuelled by the Syrian pound's tumble have made it more costly for farmers to purchase water, pesticides, seeds and fuel.

"We are facing a serious challenge," he said, inspecting the engine of a combine harvester.

This has spurred fears that foreign companies may be liable if they do business in government-held parts of the country.

Khalifa's combine is the only functional one in all of Al-Kaswa and is used to harvest several plots.

He feared US sanctions could hamper the import of spare parts if it broke down.

"The sanctions, in general, are adding to our woes."

Earlier in June, Foreign Minister Walid Muallem said Syrians should wean themselves off imports and rely on local products to combat the effects of sanctions.

Haytham Haydar, the director of agricultural planning in the Syrian government, echoed this view.

"We hope to return to large pre-war production levels" of wheat, which stood at around 4.1 million tonnes, he said from his Damascus office.

Haydar acknowledged "rising production costs" but blamed it solely on Western sanctions he described as a "war" on food security.

He said the "economic blockade" on Syria would only boost agricultural production.

"Syrians will rely on their own production capacities to weaken reliance on imports as much as possible," he said.