World   Middle East  03 May 2017  Israel shows off F-35 stealth fighters delievered from US at cost $110 million each
World, Middle East

Three of Israel's five stealth fighters took to the skies along the Mediterranean coast off Tel Aviv. 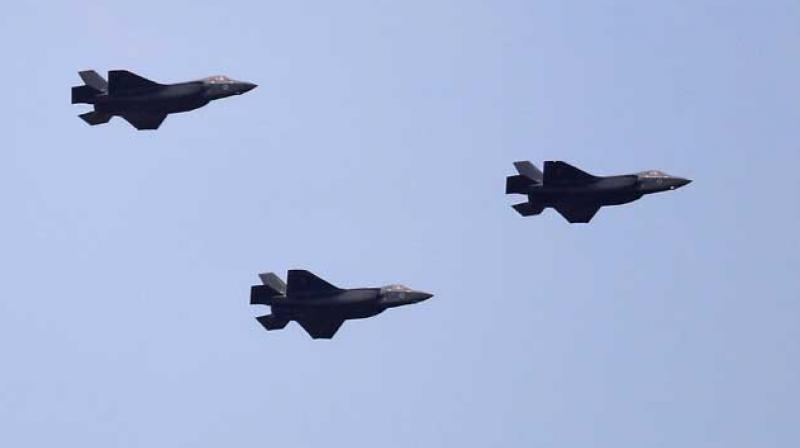 Three of Israel's five stealth fighters took to the skies along the Mediterranean coast off Tel Aviv as thousands of people gathered at the waterfront to watch.

The F-35s, made by US-based Lockheed Martin, were the highlight of the show, which marked 69 years of Israeli independence.

Israel has received the initial five jets since December with the aim of allowing it to maintain its military superiority in the turbulent Middle East, particularly regarding its arch-foe Iran.

It plans to purchase a total of 50 F-35s. Its first jets are to be operational this year.

While other countries have ordered the planes, Israel - which receives more than $3billion a year in US defence aid - says it will be the first outside the United States with an operational F-35 squadron.

Israel is buying its first 33 F-35s at an average price of about $110 million (103.5 million euros) each -- and the price tag has been criticised both in Israel and elsewhere.

The single-pilot jets can carry an array of weapons and travel at a supersonic speed of Mach 1.6, or around 1,200 miles per hour (1,900 kilometres per hour).

The pilot's ultra-high-tech helmet, at a cost of about $400,000 each, includes its own operating system, with data that appears on the visor and is also shared elsewhere.

Thermal and night vision as well as 360-degree views are possible with cameras mounted on the plane.