Burnt fields could be seen in the border area and a new military checkpoint was set up outside the Israeli community of Avivim. 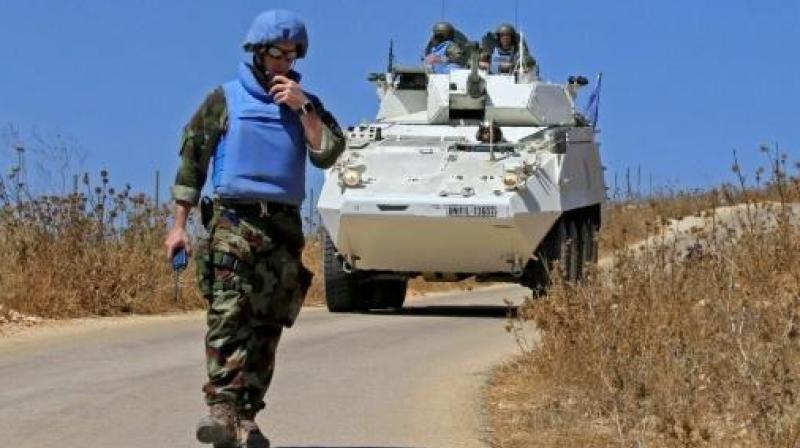 Hezbollah issued a statement soon afterward saying it had destroyed an Israeli military vehicle and killed and wounded those inside. (Photo: AFP)

Avivim: An escalation between Israel and Hezbollah has ended after a brief exchange of fire, but tensions remained high along the Lebanese border Monday after a series of accusations from the two enemies.

Burnt fields could be seen in the border area and a new military checkpoint was set up outside the Israeli community of Avivim.

Schools were however open and residents were returning to normal activity in Avivim, from where the Lebanese town of Maroun al-Ras is clearly visible on a nearby hill.

"The war can start in a minute. I am worried it could happen," Dudu Peretz, 35, said as he was dropping his son off at kindergarten.

Sunday's incident -- which caused no casualties -- followed a week of rising tensions that included what Hezbollah described as an Israeli drone attack on its Beirut stronghold on August 25.

Israel has not acknowledged that attack but subsequently accused Hezbollah of working with Iran in Lebanon to produce precision-guided missiles.

Hezbollah had warned of retaliation, and on Sunday it fired up to three anti-tank missiles from Lebanon at an Israeli battalion headquarters near Avivim and at a vehicle Israel said was a military ambulance.

Israel retaliated with around 100 artillery shells targeting the squad that fired the missiles.

Hezbollah issued a statement soon afterward saying it had destroyed an Israeli military vehicle and killed and wounded those inside.

Israel's military later refuted the claim, saying no one was injured, but Israeli media reported that a ruse may have contributed to Hezbollah's statement.

According to the reports, Israel's military staged an evacuation of two supposedly injured soldiers who were not in fact wounded in order to deescalate the situation.

The thinking was that Hezbollah could expect a major response from Israel if soldiers were wounded and would stop its assault, according to the reports.

It appeared neither side wanted a prolonged escalation.

After the exchange of fire began, Lebanon's Prime Minister Saad Hariri contacted senior US and French officials to urge their countries and the international community to intervene.

The UN called for restraint and France said it had made "multiple contacts" to avert further fire.

The United States voiced concern while noting it "fully supports Israel's right to self defence." Israel had been on alert for a response from Hezbollah, the Lebanese Shiite movement backed by Iran.

The pre-dawn August 25 attack involved two drones -- one exploded and caused damage to a Hezbollah-run media centre and another crashed without detonating due to technical failure.

The incident came hours after Israel had launched strikes in Syria to prevent what it said was an impending Iranian drone attack on its territory.

Hezbollah says two of its members were killed in that strike.

A source connected to Hezbollah called Sunday's missiles a response to those deaths and said a reaction to the alleged drone attack would take place in the air.

Israel has carried out hundreds of strikes against what it says are Iranian and Hezbollah targets in neighbouring Syria since the civil war began there in 2011.

It has pledged to prevent its arch-foe Iran from entrenching itself militarily in Syria.

Iran and Hezbollah, along with Russia, have backed Syrian President Bashar al-Assad in the conflict.

But a drone attack by Israel inside Lebanon would mark a departure -- what Nasrallah had called the first such "hostile action" since a 2006 war between them.

Sunday's escalation came ahead of Israel's September 17 election. Prime Minister Benjamin Netanyahu is seen as wanting to avoid a major conflict before the vote, but he has also warned that Israel was "prepared for any scenario."

Shlomi Flax, head of the emergency team in Yiron, another Israeli community near the Lebanese border, said he was concerned but felt the military was prepared.

"We have zero minutes to go to the shelters," he said.

"We are so close to the border the army can't notify us with a siren. But we are used to it."