As per the regulations, journalists are required to 'ensure that their reporting is balanced' 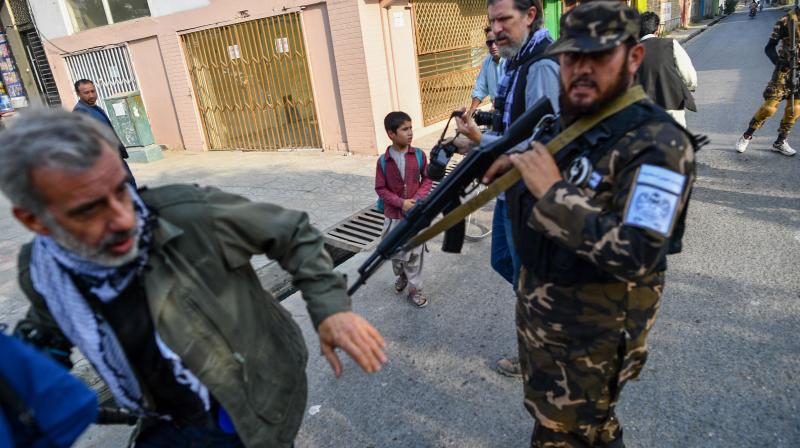 A member of the Taliban special forces pushes a journalist (L) covering a demonstration by women protestors outside a school in Kabul. (Photo: AFP)

Kabul: The imposition of a range of regulatory measures to tighten media freedom in the country by the Taliban are a cause of concern to the rights groups.

The Taliban-formed 'Ministry of Information and Culture' has imposed a set of regulations in a bid to prohibit virtually any critical reporting about the Taliban, Human Rights Watch informed.

A copy of these regulations seen by Human Rights Watch directs the media groups that they are prohibited from printing or broadcasting reports that "are contrary to Islam," "insult national figures," or "distort news content."

Associate Asia Director at Human Rights Watch Patricia Gossman has expressed concerns over these regulations and said "despite the Taliban's promises to allow media that 'respected Islamic values' to function, the new rules are suffocating media freedom in the country."

As per the regulations, journalists are required to "ensure that their reporting is balanced" and are not allowed to report on "matters that have not been confirmed by officials" or issues that "could have a negative impact on the public's attitude," Human Rights Watch reported.

Last month, the International Federation of Journalists (IFJ) had expressed concern over the safety of journalists in Afghanistan and slammed the Taliban for suppressing freedom of the media in the country.

Since Taliban rule solidified in the country, at least 153 media outlets have had to shut down over increasing threats towards journalists while female media employees have been barred from work entirely.

Meanwhile, Gossman said that the rules are proof that the Taliban do not want to face public scrutiny.

Gossman also urged the international community to take urgent actions to safeguard the condition of journalists in the country.

"Foreign governments should send the message that the Taliban's treatment of the media will remain a core concern of future relations."