Museum or mosque? The debates around Byzantium’s iconic Hagia Sofia

Once a cathedral of Byzantium Empire, then a mosque under Ottoman Empire, the iconic Hagia Sophia awaits decision to be a museum; or not 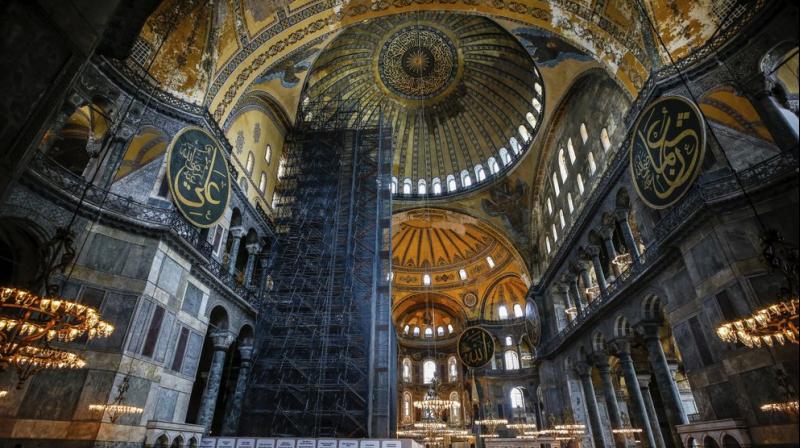 People visit the Byzantine-era Hagia Sophia, one of Istanbul's main tourist attractions in the historic Sultanahmet district of Istanbul. (AP)

Istanbul: In its more than 1,400-year existence, the majestic domed structure of Hagia Sophia in Istanbul has served as the Byzantine Empire’s main cathedral, a mosque under the Ottoman Empire and a museum under modern Turkey, attracting millions of tourists each year.

The 6th-century building is now at the center of a heated debate between nationalist, conservative and religious groups who are pressing for it to be reconverted back into a mosque and those who believe the UNESCO World Heritage site should remain a museum, underscoring Istanbul’s status as a bridge between continents and cultures.

On Thursday, Turkey’s Council of State, the country’s highest administrative court, begins reviewing a request by a group devoted to reverting Hagia Sophia into a mosque. They are pressing to annul a 1934 decision by the Council of Ministers, led by secular Turkey’s founder Mustafa Kemal Ataturk, that turned the historic structure into a museum. A decision could come later Thursday or within two weeks, the state-run Anadolu Agency reported.

President Recep Tayyip Erdogan, who leads an Islamic-oriented party, has previously spoken about possibly changing Hagia Sophia’s status to a mosque but has said his government would await the Council of State’s decision.

Analysts believe that Erdogan — a populist, polarizing leader who in nearly two decades in office has frequently blamed Turkey’s secular elites for the country’s problems — is using the Hagia Sophia debate to consolidate his conservative base and to distract attention from Turkey’s substantial economic woes.

“This is not just a debate about a building,” said Soner Cagaptay, Turkey analyst for the Washington Institute. “Ataturk established Hagia Sophia as a museum to underline his vision of secularizing Turkey. And nearly 100 years later, Erdogan is trying to do the opposite.”

”(Erdogan) feels the pressure of popular support dwindling and therefore he wants to use issues that he hopes will remobilize his right-wing base around nativist, populist, anti-elitist topics,” said Cagaptay, author of the book “Erdogan’s Empire.”

Built under Byzantine Emperor Justinian, Hagia Sophia was the main seat of the Eastern Orthodox church for centuries, where emperors were crowned amidst ornate marble and mosaic decorations.

Four minarets were added to the terracotta-hued structure with cascading domes and the building was turned into an imperial mosque following the 1453 Ottoman conquest of Constantinople — the city that is now Istanbul.

The building opened its doors as a museum in 1935, a year after the Council of Ministers’ decision.

Islamist groups, however, regard the symbolic structure as a legacy of Ottoman Sultan Mehmet the Conqueror and strongly object to its status as a museum. Large crowds have gathered outside Hagia Sophia on the May 31 anniversary of the city’s conquest to pray and demand that it be restored as a place of Muslim worship.

In the past few years, Turkey has been allowing readings from the Quran inside Hagia Sophia and Erdogan himself has recited prayers there. This year, he oversaw by video conference the recital of the “prayer of conquest” on the anniversary of the Ottoman conquest.

On Tuesday, Istanbul-based Ecumenical Patriarch Bartholomew I, considered the spiritual leader of the world’s Orthodox Christians, noted that Hagia Sophia had served as a place of worship for Christians for 900 years and for Muslims for 500 years.

“As a museum, Hagia Sophia can function as a place and symbol of encounter, dialogue and peaceful coexistence of peoples and cultures, mutual understand and solidarity between Christianity and Islam,” he said.

Bartholomew added: “the potential conversion of Hagia Sophia into a mosque will turn millions of Christians across the world against Islam.”

Greece also strongly objects to attempts to change Hagia Sophia into a mosque, arguing that its designation as a historic monument must be maintained.

“I hope that President Erdogan does not proceed with something that will deeply hurt Turkey,” Greek Foreign Minister Nikos Dendias said. “This monument has endured many things and it will always return, but Turkey’s image will take a severe blow.”

Turkish media reports say the government was considering the possibility of keeping Hagia Sophia open to tourists even if it were turned into a mosque. That status would be similar to Istanbul’s Blue Mosque, which sits right across from Hagia Sophia and functions both as a house of worship and a tourist spot.

Hurriyet and other media have reported that Hagia Sophia could be reconverted into a mosque by a public holiday on July 15, when the country marks the fourth anniversary of the foiling of an attempted coup.

Cagaptay, the analyst said, the Hagia Sophia issue would likely have a “temporary impact in keeping Erdogan’s base with him.”

“(But) if he does not deliver economic growth, I can’t see him winning elections as he did in the past,” Cagaptay said.