Russian news wire Interfax reported that 6 vessels, including the latest generation ‘Krasnodar’ diesel submarine, were part of the parade. 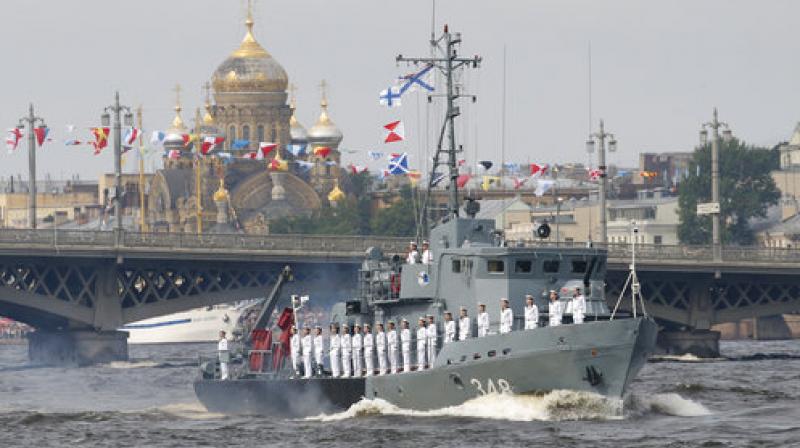 Some 50 warships and submarines were on show along the Neva River and in the Gulf of Finland off the country’s second city of Saint Petersburg after Putin ordered the navy to hold its first ever parade on such a grand scale. (Photo: AP)

Saint Petersburg: President Vladimir Putin on Sunday oversaw a pomp-filled display of Russia’s naval might as the Kremlin paraded its sea power from the Baltic Sea to the shores of Syria.

Some 50 warships and submarines were on show along the Neva River and in the Gulf of Finland off the country’s second city of Saint Petersburg after Putin ordered the navy to hold its first ever parade on such a grand scale.

“Today much is being done to develop and modernise the navy,” Putin told servicemen after surveying the military hardware from his presidential cutter. “The navy is not only dealing with its traditional tasks but also responding with merit to new challenges, making a significant contribution to the fight against terrorism and piracy.”

Read: Putin signs law allowing Russia to keep its air base in Syria

The showcase event to mark Russia’s annual Navy Day is the latest to be beefed up by Putin, with the Kremlin strongman also bolstering the traditional WWII victory parade in Moscow as he looks to flex the country’s military muscles.

Russia has ramped up its military manoeuvres as ties with the West have slumped over Moscow’s meddling in Ukraine, unnerving NATO and its members in Eastern Europe.

Smaller naval parades were also taking place from Russia’s European exclave Kaliningrad on the Baltic Sea to the annexed Black Sea peninsula of Crimea and Vladivostok in the far-east.

For the first time Moscow also showed off its naval hardware at its Syrian base of Tartus in the eastern Mediterranean, where Russian ships have played a prominent role backing up a bombing campaign in support of leader Bashar al-Assad.

Moscow and Damascus in January signed a 49-year deal for Russia to expand and modernise the facility at Tartus, further cementing the Kremlin’s influence in the region after its game-changing military intervention.