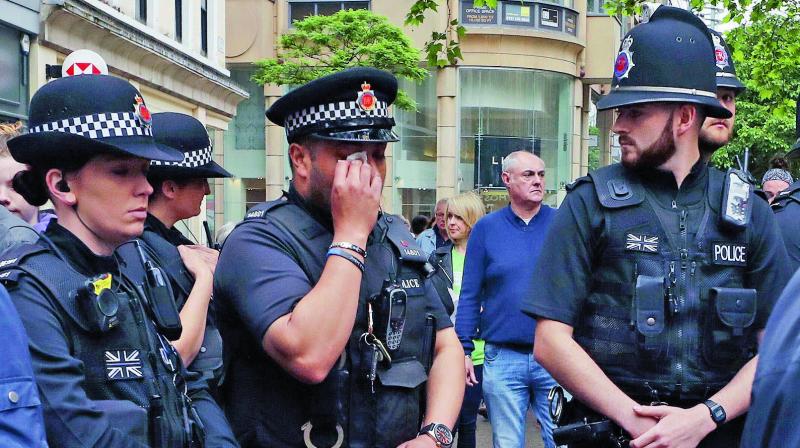 A police officer wipes away tears as he looks at flowers and tributes left in St Ann’s Square in Manchester. (Photo: AP)

Manchester: The number of hate crimes reported to the police in Manchester has almost doubled since the suicide bomb attack at the Manchester Arena on May 22, which killed 22 people and injured dozens of others.

A total of 56 hates crimes were recorded by the Manchester Police on May 24; a significant rise from the 28 reported two days ago. Police say 28 is a fairly typical number, according to Al Jazeera.

A 37-year-old Pakistani-origin doctor who spent 48 hours saving the lives of victims of Manchester terror attack was racially abused and called a terrorist after being told to “go back to your country”, media reports said on Monday.

Naveed Yasin, a trauma and orthopaedic surgeon, was on his way back to Salford Royal Hospital to continue to help the victims when a middle-aged man pulled up beside him and hurled abuse at him. He was called a “brown, P*** b******” and a “terrorist” by a thug in a van after spending two days operating on people injured in the blast, the Manchester Evening News reported.

“Go back to your country you terrorist. We don’t want you people here!” the man said. “I can’t take away the hatred he had for me because of my skin colour ... And the prejudices he had associated with this,” Yasin said.

Yasin was born and brought up in Keighley, West Yorkshire. He lives in Trafford with his wife and two daughters. His great-grandfather moved to Yorkshire from Pakistan in the 1960s.

“Terror attacks don’t discriminate against race or religion but this [the racial abuse] didn’t discriminate either,” he said. Yasin added that his daughter could have been among the victims. His eldest daughter Amelia, 11, had wanted to go to the Ariana Grande concert, but he and his wife Firdaus ruled against it because it was on a school night.

Ian Hopkins, chief constable of Greater Manchester Police, said, “It is important that we continue to stand together here in Greater Manchester particularly against some of the hateful views that we’ve seen from a very small minority of the community that have no place here.”