World   Europe  30 Apr 2020  Russia fears the return of other demons while under lockdown
World, Europe

Russia fears the return of other demons while under lockdown 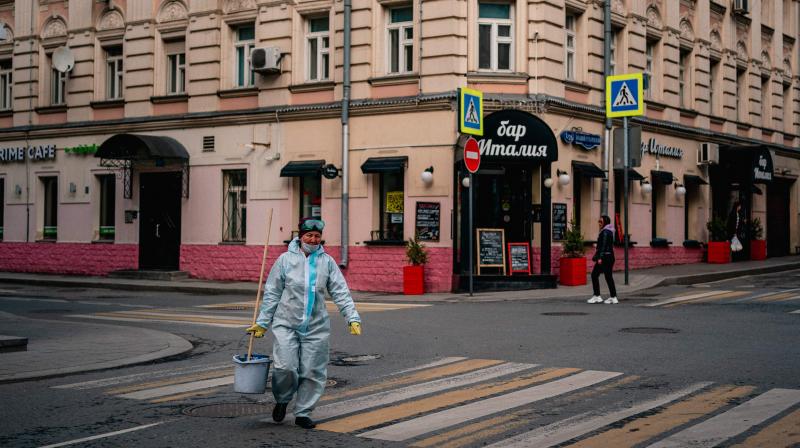 A communal worker who disinfects residential buildings crosses a street in Moscow. (AFP)

Moscow: Stuck in cramped flats and struggling with fears of the coronavirus and its economic impact, many Russians are worried about the return of an old demon.

"When I found myself alone at home, the first thought I had was 'ah, it's a good time to get drunk,'" says Tatyana, a recovering alcoholic on lockdown in Moscow.

"Not everyone manages to resist during confinement," says the 50-year-old, who has been sober nearly seven years and is attending Alcoholics Anonymous meetings online.

Despite Russia's reputation for hard drinking, alcoholism has been on the wane in the country for years, in part due to anti-drink campaigns and aggressive moves by authorities to control sales.

Alcohol consumption in Russia fell by more than 40 percent between 2003 and 2016, according to the World Health Organization, and Russian adults began drinking less on average than the French or Germans.

But experts and campaigners are pointing to worrying signs that under-stress Russians may be reviving old habits.

Alcohol purchases jumped after authorities imposed lockdown orders in late March, with sales in the first week of isolation rising by 65 percent, according to market research group GfK.

In a survey by campaign group Sober Russia, 75 percent of respondents reported buying more alcohol than usual, similar to what they would purchase ahead of New Year's Eve.

Many were simply stockpiling, but sales were also boosted by popular myths that alcohol can prevent the virus.

"Eighty percent of those we surveyed think that alcohol immunises you against COVID-19, while on the contrary, it weakens immunity and exacerbates chronic conditions," says Sober Russia's chief Sultan Khamzayev.

Vasily Shurov, a psychiatrist specialising in addiction, says the phone hasn't stopped ringing at the private addiction clinic he heads in Moscow. All its places are now full or reserved.

"In isolation, patients who are fragile experience a higher level of anxiety" and those at risk "start drinking as it's the only way they can relax," he says.

In the clinic, haggard patients wander through the corridors and gather in the smoking room.

A dishevelled man in his 30s says that he arrived three days earlier and "it's better this way, for everyone back home".

Along with increased drinking, groups helping victims of domestic violence say the number of reported attacks has grown dramatically since the lockdown started.

Higher levels of drinking may not be the only factor, but Anna Rivina, the head of Moscow's "No to Violence" victim-support centre, says that "alcohol rouses the devil" and women are reporting "more severe" violence.

Mari Davtyan, a lawyer who represents victims and campaigns for better legislation, says she has received several accounts from women of how their partners attacked them during lockdown binges.

One of them, 32-year-old Irina who lives in the Moscow region with her two-year-old child, said in her account: "My husband was laid off. He started drinking and beating us.

"I wanted to go live with my parents but he threatened to report me to the authorities and say I was putting my child in danger by leaving our home."

Rights campaigner Alyona Popova is calling for an emergency law to be passed to ensure women fleeing domestic violence are not penalised for breaking lockdown rules.

"You're stuck home with your oppressor, no money to leave. Alcohol and poverty increase the violence," she says.

Sober Russia is calling for restrictions on the amount of alcohol an individual can buy and closures of shops selling alcohol.

"An enormous amount of work has been done in recent years. But today we are in an emergency situation," its head Khamzayev says.

"We risk losing what we've accomplished as people find themselves without work and depressed... When the lockdown ends, we can expect a long and deep economic crisis."

Doctor Shurov also fears what will happen at the end of lockdown.

"People will have missed Easter, the May holidays. And suddenly they'll be able to go out and drink... like there's no tomorrow."