Germany bans Hezbollah activities in the country, calls it a terrorist organisation 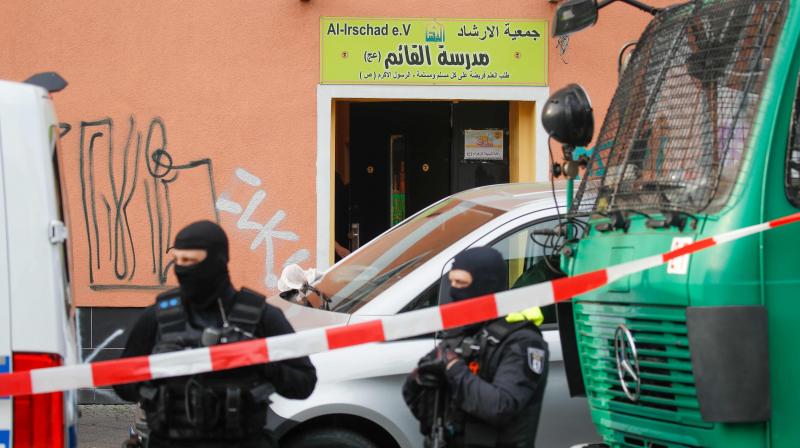 Poilice stand in front of Al-Irschad Mosque during a raid today. (AFP)

Berlin: The German government on Thursday said it was banning all activities of Lebanon's Iran-backed Hezbollah movement in Germany, calling it a "Shiite terrorist organisation".

Interior minister Horst Seehofer "has today banned the operation" of the group in Germany, his spokesman wrote on the ministry's Twitter account.

Raids were taking place in several places across the country, he added.

Dozens of police and special forces stormed mosques and associations linked to Hezbollah in Bremen, Berlin, Dortmund and Muenster in the early hours of the morning, German media reported.

"Even in times of crisis the rule of law is upheld," the ministry spokesman tweeted.

Although Hezbollah has no official presence in Germany, security forces believe its members use the country as a safe haven and to raise funds, including through criminal activities.

Like the European Union, Germany had until now only outlawed Hezbollah's military wing while tolerating its political wing.

The United States and Israel have long designated Hezbollah as a terrorist group and urged allies to follow suit.

Britain outlawed Hezbollah's political wing last year, making membership of the Shiite movement or inviting support for it a crime.

The decision follows outrage over the display of the Hezbollah flag, which features a Kalashnikov assault rifle, at pro-Palestinian demonstrations in London.

The mood began shifting in Germany too with the German parliament passing a resolution last December to ban the group from operating in Germany altogether.

Among other things, today's ban means the group's supporters would no longer be allowed to wave Hezbollah flags at marches in Germany.

Hezbollah, which backs Syrian President Bashar al-Assad in the country's civil war, is seen by Israel as an Iranian proxy, seeking to extend the Islamic republic's military reach to the Jewish state's northern border.

Israeli warplanes have carried out hundreds of air strikes in Syria over the past few years against what Israel says are Iranian and Hezbollah targets.

Hezbollah was established in 1982 during Lebanon's civil war. It is now a major political party in the country, where it holds a majority in parliament along with its allies.