Johnson has said he only wants to debate with Corbyn, seeing him as theoretically the only alternative prime minister. 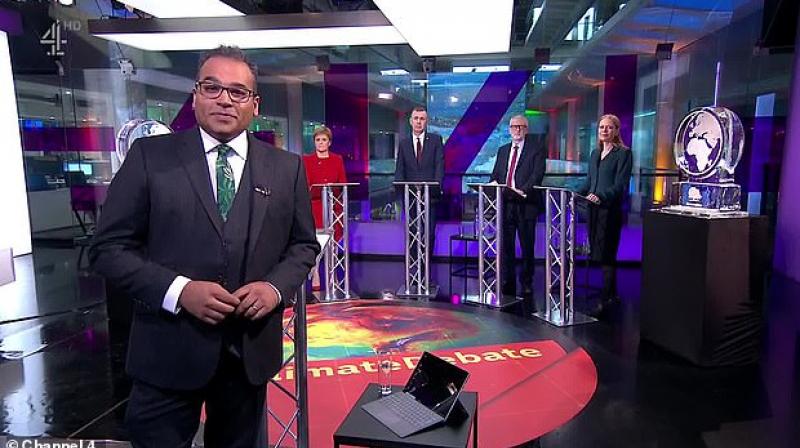 Britain's governing Conservative Party complained to the broadcasting regulator after its chosen representative was shut out of a general election television debate on climate change on Thursday. (Photo: Channel 4)

London: Britain's governing Conservative Party complained to the broadcasting regulator after its chosen representative was shut out of a general election television debate on climate change on Thursday.

Channel 4 said their one-hour live debate was for party leaders only but Prime Minister Boris Johnson declined to take part.

Cabinet minister Michael Gove, a former environment secretary, showed up to represent the centre-right party instead but was not allowed on.

Johnson was replaced by a melting ice sculpture of planet Earth with his party's logo on, as was Brexit Party leader Nigel Farage, who also declined to attend.

"Denying the Conservative Party any opportunity to contribute to this cross-party event is unfair and breaches the requirements to 'preserve' impartiality," Lee Cain said in a letter to Ofcom on behalf of the Conservatives.

"There is clear precedent for such cross-party debates to take place without party leaders necessarily contributing."

Presenter Krishnan Guru-Murthy, thanking them afterwards, added: "Thank-you also to Michael Gove from the Conservative Party who did come here but sadly, as we made clear from the start, this debate was for leaders only and our leaders were only prepared to debate other leaders.

"Our offer to Boris Johnson and Nigel Farage to come here and discuss the climate emergency remains open."

In the debate, Labour leader Jeremy Corbyn said: "This election is our last chance to tackle the climate and environment emergency."

"It is morally wrong to leave our seat at the table and give up our influence to create the change we need right across the world."

Johnson has said he only wants to debate with Corbyn, seeing him as theoretically the only alternative prime minister.

The Brexit Party said it did not take part because it had "no faith that the broadcaster will conduct this debate in a fair and objective way".