UK says members of suicide bomber’s network could still be a large. 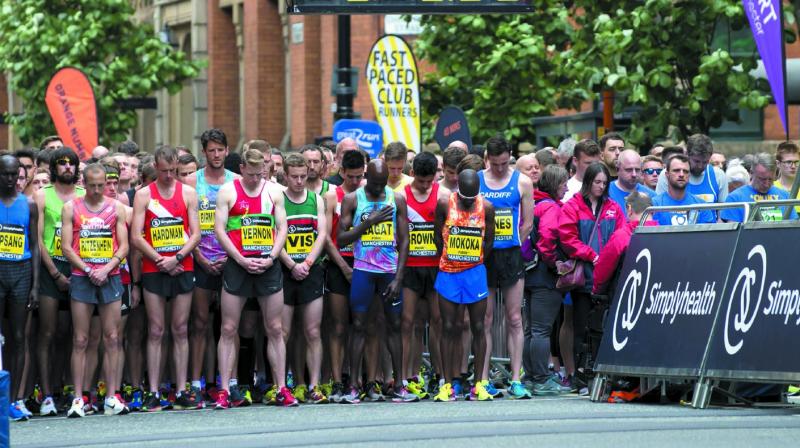 Runners observe a minute of silence for the victims of the Manchester Arena bombing before the start of the Great Manchester Run on Sunday. (Right) A handout CCTV photo shows the bomber Salman Abedi on the night he commited the attack. (Photo: AFP)

Manchester: A British minister said on Sunday that members of suicide bomber Salman Abedi’s network could still be a large as thousands defied the terror threat to take part in an annual half marathon.

As runners pounded the streets of the northwestern English city, police arrested a 25-year-old man in the eastern Old Trafford area bringing the number now detained on UK soil in connection with the attack to 12.

Manchester-born Abedi, a 22-year-old of Libyan origin, killed 22 people on Monday evening when he targeted a pop concert by US teen idol Ariana Grande. Asked by the BBC if some of Abedi’s network were still at large, British home secretary Amber Rudd said, “Potentially. The operation is still really at full-tilt in a way and so, until the operation is complete, we can’t be entirely sure that it’s closed.”

Authorities in Libya have detained Abedi’s brother and father while British investigators appealed to the public late Saturday for details of the bomber’s movements in the days before the attack.

Police released photographs from security cameras showing Abedi on the night of the massacre wearing jeans and trainers, a black bodywarmer and a baseball cap, with the straps of his backpack visible on his shoulders.

The police said one of the last places he went to was a “city centre flat. “The flat is highly relevant as a location which we believe may be the final assembly place for the device.”