The practice of erasing women's names is rooted in Afghan customs, rather than Islam, the dominant religion. 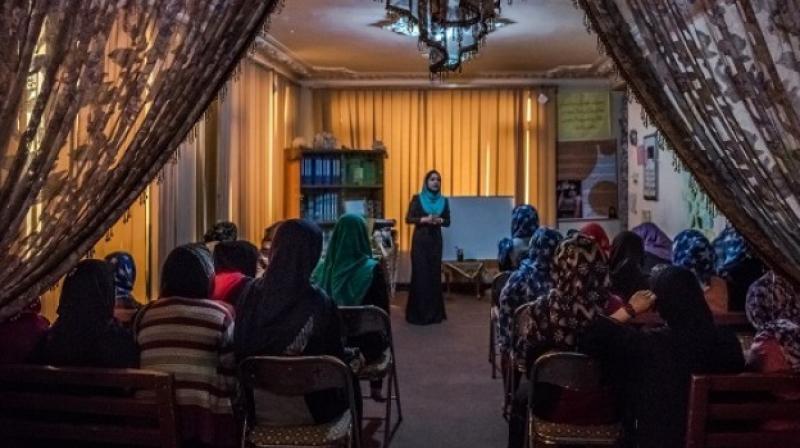 #WhereIsMyName aims to challenge attitudes that allow men to make all decisions and leave women invisible and powerless. (Photo: AFP)

London: In Afghanistan's patriarchal society, a woman's name should not be revealed, even on her grave.

"Mr X's" mother, daughter or sister, the headstone might read, rather than the name of the deceased.

Openly using the names of women is regarded as inappropriate and even an insult in the conservative Muslim nation.

On a birth certificate there is no sign of the mother's name. On a wedding invitation the bride's name is not mentioned - only the names of her father and husband-to-be.

But a women-led campaign on social media is starting to challenge the old Afghan tradition.

#WhereIsMyName, recently launched by a small group of women's rights activists, wants to bring women's given names to official documents and to the lips of Afghan people.

"Our society is full of injustice for women, basically everything is taboo for women," activist Bahar Sohaili, a prominent member of the campaign, told the Thomson Reuters Foundation.

"With this campaign we aim to change many things for women and social media has opened a new window to Afghanistan's young generation."

Popular Afghan singer Farhad Darya has supported the campaign, posting a picture of himself with his wife and the caption "Farhad and Sultana Darya".

Thousands of Afghans, including authors, journalists and musicians have backed the movement on Facebook and Twitter, aided by widening access to the internet in the country.

"I went to a private bank office to fill up the form, when the manager asked my mother's name, I paused for few seconds, because I had actually forgotten my mother's name. Nobody in all these years asked or called her by her name," said Batool Mohammadi, a member of the campaign.

The practice of erasing women's names is rooted in Afghan customs, rather than Islam, the dominant religion.

It is a symbol of women's second-class status in society, where decisions about their education and marriage are left to the men of the family.

Since the ultra-conservative Taliban was overthrown in 2001, Afghan women have regained the right to go to school, to vote, and to work. But violence against women in the home is widespread, and often goes unpunished.

#WhereIsMyName aims to challenge attitudes that allow men to make all decisions and leave women invisible and powerless.

"Many times I meet wonderful women with bright thoughts and opinions during my work trips, but when I want to interview them or take pictures they say to me, 'Let me ask my husband, father or brother if they allow me to talk or be pictured,'" said Farzanah Wahidi, a female photojournalist from Kabul.

Bahar Sohaili and her friends are fighting for the day that a woman's name and her identity will no longer be shameful.

"We aim to put pressure on the government to enact laws to protect women's rights. Whenever we demand our rights before a court or in parliament they (officials) use the pretext of religion to put us down," she said.

According to Afghan law a mother's name should not be recorded on a birth certificate. Abdullhah Atahi, a spokesman for the High Court in Kabul told the Thomson Reuters Foundation that Afghan society wasn't ready for change.

"We don't have a problem mentioning the mother's name on the birth certificate or on other relevant documents, but in Afghanistan's culture people aren't ready for such a modern step," he said. "It may invite unwanted chaos."

"There are some radical elements in the parliament who are against these steps for women," she said by phone from Kabul. "But we are trying hard for amendments of existing laws and to formulate new laws to protect the rights of women."