India calls draft on chemical weapons use 'incomplete', votes against it

The Indian Ambassador said the country is against use of chemical weapons and those who join such 'abhorrent acts' must be held accountable. 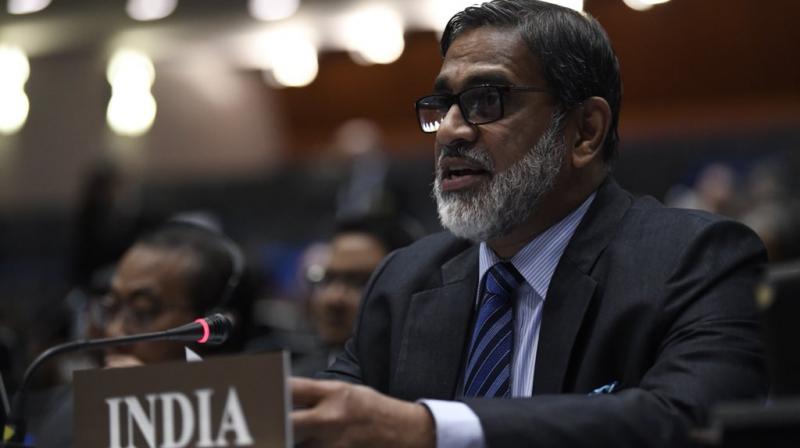 India's Ambassador and Permanent Representative to the Organisation for the Prohibition of Chemical Weapons (OPCW), Venu Rajamony speaking at the conference. (Photo: @IndinNederlands/Twitter)

The Hague: India has voted against the draft decision on addressing the threat from chemical weapons use at a special conference of the Organisation for the Prohibition of Chemical Weapons (OPCW) at The Hague, citing "incomplete consultations".

Speaking at the conference, India's Ambassador and Permanent Representative to the OPCW, Venu Rajamony, said the country is against the use of chemical weapons under any circumstances and believes those who indulge in such "abhorrent acts" must be held accountable.

"We have studied this draft very carefully and have consulted widely including with the drafters and the main co-sponsors of the draft decision. However we believe that on an issue of such grave importance, the consultations conducted by the sponsors remain incomplete. It has been India's view that the draft decision of such far reaching importance and implications should be the end result of a comprehensive and extensive consultation," he said, explaining India's vote on the draft decision on 'Addressing the Threat from Chemical Weapons Use'.

He said India expresses its deepest sympathies to the victims of chemical weapons attacks and their families.

The conference has been called by the United Kingdom, the United States and the West to have discussions on upholding the global ban against the use of chemical weapons.

The UK has reportedly proposed to consider empowering the OPCW to identify the organisation or government responsible for chemical attacks in addition to its existing power of carrying out the investigation into such cases.

"It has been India's consistent position that the use of chemical weapons anywhere, at any time, by anybody, under any circumstances, cannot be justified and the perpetrators of such abhorrent acts must be held accountable," Mr Rajamony  said.

The use of chemical weapons is in complete disregard of humanity, and is reprehensible and contrary to the provisions of the Chemical Weapons Convention as well as accepted international legal norms. It is important to maintain the credibility and integrity of the Convention, he said.

All investigations of the alleged use of chemical weapons should be conducted in an impartial and objective manner and strictly in accordance with the provisions of the Convention, the ambassador said.

He urged that all provisions of the Convention be utilised to address these concerns, according to a statement issued on Thursday by the Indian Embassy at The Hague.

Mr Rajamony said while there was unity on the goal, there are strong differences on how to achieve this goal.

"India attaches the highest importance to this organisation and has therefore always emphasised the importance of consensus and the need for all decisions to be taken by the members of OPCW in consultation with each other, taking on board different points of view," he said.

India has also called for constructive engagement, dialogue and unity of purpose at the specially-convened conference.

Mr Rajamony said it was important that the extensive support and universality that the OPCW enjoys is not dissipated, as this would undermine the long-standing credibility of the organisation.

"Any long-lasting and effective solution to the challenges faced by the OPCW can only be found through wide ranging consultations among States Parties," he said.

India calls for constructive engagement, dialogue & unity of purpose at Special Session of the Conference of the States Parties to the Chemical Weapons Convention on June 26 at The Hague @venurajamony @MEAIndia @PMOIndia @narendramodi @SushmaSwaraj @OPCW https://t.co/zhJLyrLwS1

The global ban against chemical weapons is the fundamental goal for which the Chemical Weapons Convention has been adopted.

The special session is being held in the backdrop of the widespread concern over reports of use of chemical weapons in Malaysia, the UK, Northern Ireland, Syria and Iraq.

The meeting is taking place over three months after the Salisbury nerve agent attack against a former Russian spy which the UK says was carried out by Russia.