Energy and Clean Growth Minister Chris Skidmore signed the order enacting the law after it was passed in both houses of parliament. 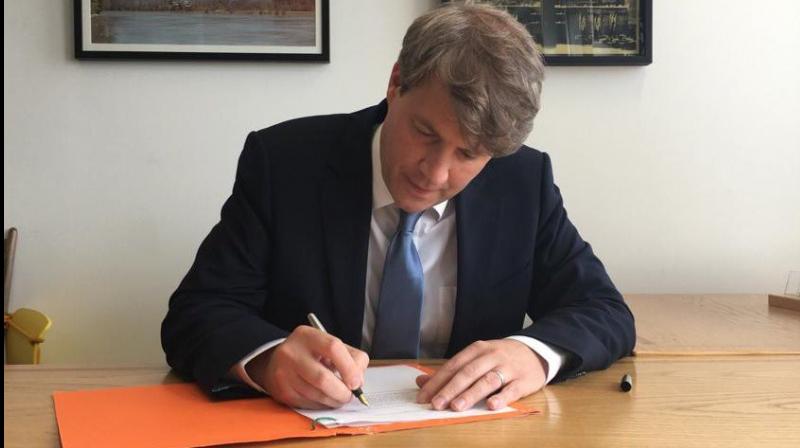 London: Britain on Thursday became the world's first major economy to adopt the tough new target of lowering fossil fuel emissions to a level of net zero by 2050.

Energy and Clean Growth Minister Chris Skidmore signed the order paper enacting the legislation after it passed both houses of parliament without a vote earlier this week. "The UK kick-started the Industrial Revolution, which was responsible for economic growth across the globe but also for increasing emissions," Skidmore said in a statement.

"Today we're leading the world yet again in becoming the first major economy to pass new laws to reduce emissions to net zero by 2050 while remaining committed to growing the economy." The deadline is more ambitious than Britain's previous policy of cutting emissions by 80 percent over the same period.

Finance minister Philip Hammond has reportedly warned it could cost more than 1.0 trillion Pound (USD 1.3 trillion, 1.1 trillion euros) to cut the 2050 target to net zero. Britain's top advisory body on climate change this year said the net zero target could be achieved within a budget of 1.0-2.0 percent of gross domestic product by 2050.

The Committee on Climate Change (CCC) added the deadline would require the rapid rollout of new policies such as making all new cars and vans electric by 2035 and quadrupling low-carbon electricity production.

The CCC said there would be a greater than 50-percent chance of limiting the average global temperature rise to 1.5 degrees Celsius -- the "safe" limit identified by the UN's Intergovernmental Panel on Climate Change -- if Britain's move was replicated across the world. "We're pioneering the way for other countries to follow in our footsteps driving prosperity by seizing the economic opportunities of becoming a greener economy," Skidmore said.

The government definition of "net zero" means that emissions are balanced by schemes to offset them. These include planting trees or using technology to capture and store carbon emitted from burning coal and oil.

Natural gas is a less-polluting fossil fuel that some economists see as a temporary option industry could adopt towards the net zero targets.

Britain is also part of the EU Emissions Trading Scheme -- a so-called "cap and trade" mechanism that has come under heavy criticism from environmental campaigners.

It tries to lower emissions by setting a price for carbon. Nations that exceed their emissions "cap" can purchase the non-used portions allocated to low-emitting nations. Environmental campaigners say pollution has no national borders and that emissions trading does nothing to lower the global amount of greenhouses gases in the atmosphere.