Modi said that relations between India and the Netherlands are century old and the two countries will keep on moving towards stronger ties. 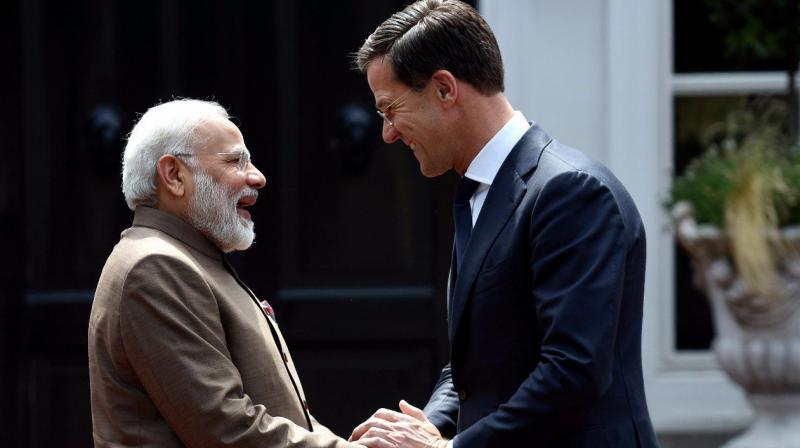 After the bilateral talks between Prime Minister Modi and his Dutch counterpart Mark Rutte, the two countries signed three MoUs in the fields of social security, water cooperation and cultural cooperation.

During the talks, the two leaders reaffirmed their commitment to climate change accord and strengthen cooperation in developing renewable energy.

Ahead of the talks, Modi who is here on the final leg of his three-nation tour thanked the key European nation for backing India's Missile Technology Control Regime (MTCR) membership.

"Because of your support India got the membership of the MTCR," Modi said.

"Ties between India and the Netherlands are very old. Our bilateral relations are very strong," he said.

He said that relations between India and the Netherlands are century old and the two countries will keep on moving towards stronger ties.

Modi said the Netherlands is the 5th largest investment partner globally and in the last three years it has emerged as the 3rd largest source of FDI for the country.

In the joint address, Dutch Prime Minister Rutte said India's emergence as a global power is a "welcome development from both political and economic point of views."

"Political because of the values we share with respect of rule of laws and security," he said. He commended India for its commitment to renewal energy and to the Paris climate agreement. He praised Modi for announcing major sustainable initiatives like 'Clean India' and 'Make in India'.

"The Netherlands is a key partner to help India achieve its goals," he said. "India is now a global economic power. It is world's second biggest economy and Indian market has a lot of potential. We have a plenty to offer to India too," he said.

He said Europe is India's biggest trading partner and 20 per cent of India's export to Europe enters through the Netherlands. "So, for India, we are an entry (point) to Europe," he said.

The Dutch premier said the ties is only expected to grow in coming years. "Today we are giving fresh impetus to ties by easing the flow of capital in both directions. I believe this is one of the many ways to boost ties in the next 70 years and beyond," he said.

This year, the two countries are celebrating 70 years of the establishment of Indo-Dutch diplomatic relations. Modi, during his day-long visit, will also call on King Willem-Alexander and meet Queen Maxima.

He would also be meeting with CEOs of major Dutch companies and encourage them to join the Indian growth story.