Russia annexed Crimea in 2014 after a military intervention in eastern Ukraine. 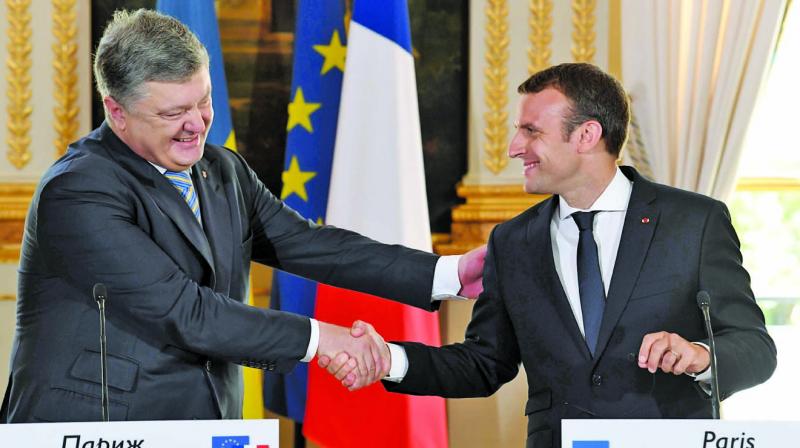 French President Emmanuel Macron shakes hands with his Ukrainian counterpart Petro Poroshenko during a joint press conference after a meeting at the Elysee Palace in Paris. (Photo: AFP)

Paris: President Emmanuel Macron said on Monday that France refuses to recognise Russia’s “annexation” of the Ukrainian peninsula of Crimea but that he hoped to make progress towards peace.

Mr Macron said after meeting Ukrainian President Petro Poroshenko in Paris that his approach to future talks was unambiguous: “France is committed to Ukraine’s sovereignty with its recognised borders,” he said.

Russia annexed Crimea in 2014 after a military intervention in eastern Ukraine.

The new French President said he expected a new round of the so-called “Normandy format” talks on the issue — involving France, Germany, Russia and Ukraine — to be held in late June or early July.

Mr Macron said he hoped the discussions would make progress on the contentious issue of withdrawing forces from the area around the border with Russia. He said France would make renewed efforts to allow monitors from the Organization for Security and Co-Operation in Europe (OSCE) to carry out their work overseeing a ceasefire in eastern Ukraine that is frequently breached.

The French foreign ministry said on Monday that the OSCE observers were being subjected to “unacceptable intimidation and obstacles”.

Mr Poroshenko said after meeting Macron that “I am far more optimistic” of agreeing “a peace plan and an end to the occupation of Ukraine”.

The EU leaders agreed last week to extend stringent economic sanctions against Russia for another six months, saying Moscow had failed to meet its commitments on the ceasefire. Two Ukrainian soldiers were killed on Saturday in the restive east even as a new ceasefire went into force. On the same day, Russian President Vladimir Putin visited Crimea in a trip that Kiev condemned as a violation of its sovereignty.