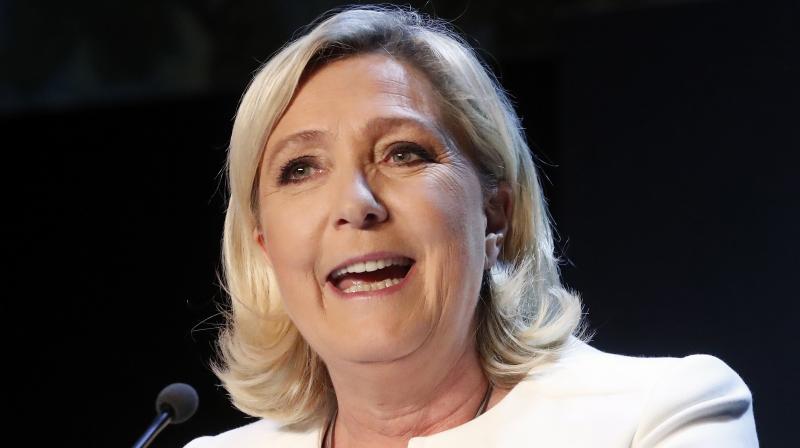 The voter turnout in this election was estimated around 51 per cent. (Photo:AP)

The voter turnout in this election was estimated around 51 per cent, marking the highest in 20 years, and suggesting more than 200 million citizens across the 28-nation bloc cast their ballot in a poll billed as a battle between populists and pro-European forces, The Times of Israel reported.

Le Pen's National Rally garnered around 24 per cent votes, with Macron's centrists trailing with 22 to 23 per cent votes, according to two polls from Ifop-Fiducial and Harris Interactive-Agence Epoka.

In addition, Italy's far-right League, headed by Deputy Prime Minister Matteo Salvini, also won the most votes with between 27-31 per cent, according to exit polls.

Across Europe however, according to a projection prepared by the parliament, the centre-right European People's Party (EPP) is on course to have the most seats in the assembly with 173, down sharply from 216 in 2014.

"I guess that some marginal parties will be less marginal tonight," European Commission president Jean-Claude Juncker said as he cast his vote in his native Luxembourg.

According to exit polls, Germany's anti-immigrant and right-wing Alternative for Germany (AfD) broke 10 per cent in a national poll for the first time, while the mainstream Socialist party lost ground and the Green party moved into second place behind the ruling centre-right.

And in Belgium, the far-right Flemish separatist Vlaams Belang was on course to triple its previous score.

In Finland, the far-fight Finns Party increased its vote share and retained its two EU seats. The Sweden Democrats were on course to increase their share from 9.67 to 16.9 per cent.

Meanwhile, in his home country of Poland, European Council chief Donald Tusk expressed confidence that voters would not succumb to the approach of what he called "radical political movements, euroskeptics."

But Tusk also admitted that the stakes were high, adding, "The first priority, not only for this institution, is to save the EU as a project, not only at this time but in the long term, and I'm sure that they will manage."

Euroskeptic parties opposed to the project of ever closer union hope to capture as many as a third of the seats in the EU parliament, disrupting Brussels' pro-integration consensus.

The lead campaigner for Le Pen's National Rally, Jordan Bardella, was quoted as saying, "The gains for our allies in Europe and the emergence of new forces across the continent... open the way for the formation of a powerful group."

Another nationalist party, the Fidesz of Hungary's Prime Minister Viktor Orban, was on course for a massive 56 per cent victory, according to a poll conducted Sunday.

EU leaders have been invited to a summit on Tuesday to decide the nominees. The EPP is insisting on German conservative Manfred Weber for the Commission, but Macron and some others oppose choosing a parliamentarian.