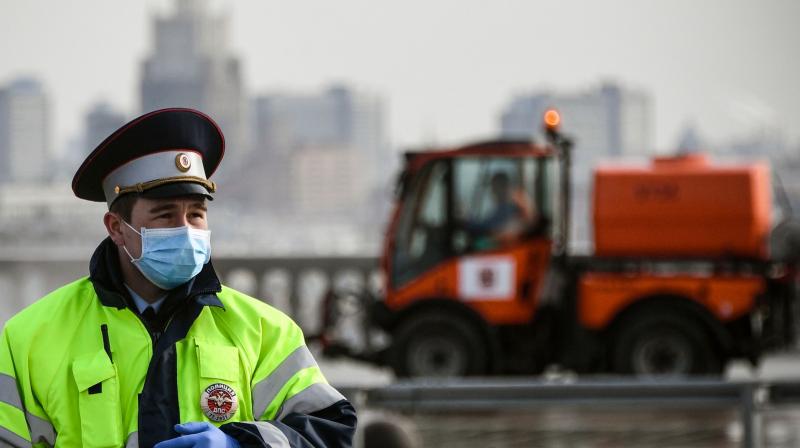 A Russian traffic police officer wearing a face mask and protective gloves stands in front of a municipal vehicle cleaning and disinfecting a street at Vorobyovy Hills observation point in Moscow. (AFP)

Moscow:  Russia reported 6,198 new confirmed coronavirus cases on Monday versus 6,361 on the previous day, which took the national tally of infections to 87,147.

The Russian coronavirus crisis response center said that 50 more deaths of coronavirus patients were confirmed in the last 24 hours.

In the number of confirmed coronavirus cases, Russia surpassed mainland China, which reported the total of 82,830 cases on Monday.

Meanwhile, a total of 874 servicemen in the Russian military have tested positive for the new coronavirus since March, Russia’s Defense Ministry said Sunday.

Almost half of them — 379 people — are isolated at home; others are being treated in various medical facilities. Four people are in grave condition, including one on a ventilator.

The vast majority of the country’s regions have been on lockdown since late March, with only essential businesses — grocery shops, pharmacies, banks — operating and people ordered to stay at home.

Earlier this month, Russian president Vladimir Putin indefinitely postponed the traditional May 9 military parade marking the 1945 defeat of Nazi Germany in World War II because of the growing outbreak.

Military units have already rehearsed the parade — footage of these rehearsals showed hundreds of servicemen drilling outside Moscow without observing social distancing. Kremlin spokesman Dmitry Peskov said that the military had their own isolation and distancing protocols which allowed them more freedom.